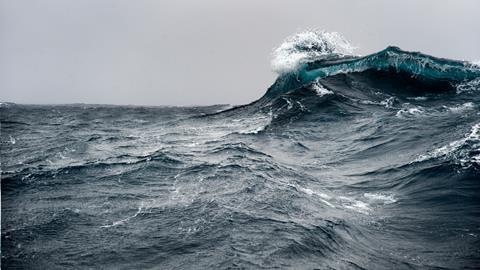 Saltwater could be used to produce green hydrogen using a system that combines electrochemical water splitting with forward osmosis. The approach could allow up-scaling of hydrogen fuel production using the planet’s predominantly salty natural water sources without pre-treatment or purification.

It’s definitely one of those papers that makes you wonder, “How come no one thought of that before?”

Using solar energy to electrochemically split water into oxygen and hydrogen, akin to how plants photosynthesise, shows much promise for renewable energy. The hydrogen that’s liberated can then be mixed with carbon dioxide to make hydrogen fuels.

However, efficient water splitting depends on catalytic electrodes, which usually require pure water at basic conditions to avoid damage. Scaling up water splitting to ultimately produce hydrogen fuels has, therefore, been limited by the need for costly desalination and purification processes to obtain enough pure deionised water. Meanwhile, most natural water sources are impure. Around 96.5% of the planet’s water is brackish or seawater, containing dissolved salts and organic matter that are corrosive to standard catalysts. 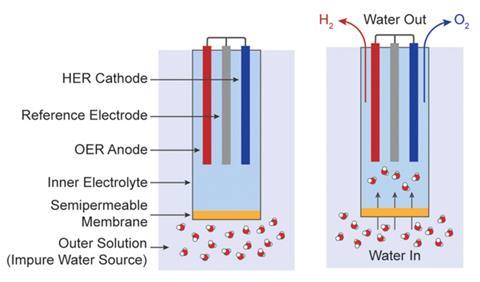 Nocera says he and his graduate student Veroneau had initially been looking at designing a new way to generate oxygen from seawater. In the process they noticed forward osmosis could be effective in water splitting for energy uses, which led them to develop a forward osmosis-water splitting (Fows) cell.

To make the experimental cell, the researchers cut off the bottom of a plastic centrifuge tube and turned it upside down. They then drilled a hole in the screw cap of the tube, now at the bottom, before placing a forward osmosis semi-permeable cellulose acetate membrane inside the screw cap and screwing it on. Next they filled the upturned tube with a sodium phosphate electrolyte solution before inserting platinum electrodes to catalyse water splitting.

The team then prepared a sodium chloride solution to mimic seawater. When the Fows cell was placed inside the saltwater solution and a current applied, hydrogen and oxygen were produced. As the water in the cell depleted, a concentration gradient formed, enabling forward osmosis to drive saltwater up through the predrilled hole in the tube’s cap at the bottom and across the semi-permeable membrane to deliver pure water into the cell. By balancing the influx and outflux rates, pure water could be continually extracted from the saltwater to feed the water-splitting cell.

‘The beauty of the work is that there are no moving parts or extra energy inputs required here, just an inexpensive semipermeable membrane,’ comments Mark Symes, who investigates electrocatalysis at the University of Glasgow. ‘It’s definitely one of those papers that makes you wonder, “How come no one thought of that before?” I would not be surprised to see rapid development of this idea into a large-scale system for electrolysis in untreated water.’