Harry Destecroix is not one of Britain’s richest men, despite claims in the tabloid headlines this summer. ‘The Sun was one of the worst,’ says Destecroix. Still, it is true that Ziylo, the spin-out company he helped found, was bought by Novo Nordisk in a deal that could ultimately be worth up to £620 million. It could be worse.

Destecroix was frustrated with the tone of the coverage, however, because he believes Ziylo is built around a rare piece of supramolecular chemistry – rare in that it really could transform lives. Novo Nordisk, which specialises in diabetes care, is hoping to use the technology to develop a smart insulin. If successful, it could extend the lives of millions of diabetics worldwide. 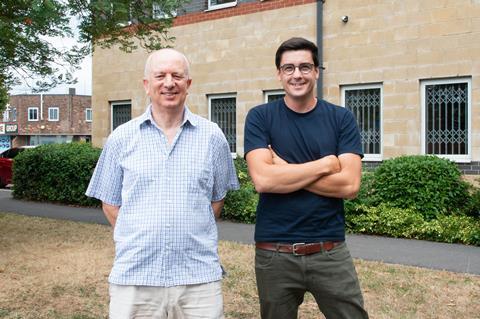 The journey began over 20 years ago, when chemist Tony Davis, now at the University of Bristol , became interested in designing a supramolecular receptor that could bind carbohydrates in water. It is a particularly niggling challenge. For one thing, with their many hydroxyl groups, sugars are very polar, and hence well solvated by water – coaxing them inside an organic molecule is a big ask. For another, the shapes of sugars are intricate, with only subtle differences in the configuration of those hydroxyl groups making the difference between glucose and galactose, for example. This makes binding one sugar at the exclusion of all others difficult.

Davis realised, however, that glucose has a unique order to its structure. The hydroxyl groups all point outwards, or equatorially, from the main carbon ring, with hydrogens pointing axially up and down. He imagined what he calls a ‘temple’ receptor, with pillars presenting hydrogen bond acceptors to match the hydroxyl groups and an aromatic roof and floor that could create CH–π bonds. It took years to find a structure that both worked and was practicable to synthesise. But in 2012, Davis’s team produced a receptor that can bind glucose in water with an affinity approaching that of the weakest natural sugar-binding proteins .

A small team including Destecroix and Davis founded Ziylo in 2014, aiming to use the receptor to make a smart glucose monitor. Diabetics nearly always inject a little less insulin than they need, says Destecroix. That is only sensible, because low blood sugar can kill. But in practice, most diabetics overcompensate a tiny bit, and so spend a lot of time with slightly elevated blood sugar levels. In the long term, this can cause blindness and liver damage. An accurate way of monitoring blood sugar levels could help.

Before long, they hit a problem. They needed commercial lab space, and there was nothing suitable in Bristol. So two years in, they founded Unit DX, an incubator for science start-ups that is now home to more than 20 companies.

Ensconced in their new home, the Ziylo team quickly found something troubling. As well as binding glucose, the receptor also bound certain aromatic molecules derived from DNA, including uracil. That would distort the readout from any sensor based on the molecule. Looking back at that time, ‘it was a hard slog’, says Destecroix.

Davis began remodelling the receptor to make it less suitable for those aromatic molecules. He realised that creating a little more space between the receptor’s ‘roof’ and ‘floor’ could do the trick, and came up with a new design that he thought would work. 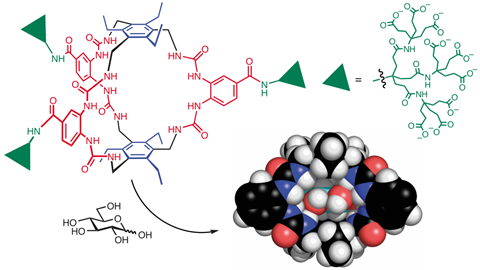 The receptor molecule has hydrogen bonding urea groups (red) to interact with the hydroxyls on glucose, and aromatic capping groups (blue) to bind the axial CH groups

A student in Davis’s group at the university, Robert Tromans, produced the molecule and the team did some preliminary tests. ‘When we saw that it didn’t bind uracil we knew it wouldn’t bind anything except glucose,’ says Destecroix. It also binds glucose 320 times more strongly than the previous receptor. ‘At that point, we dropped everything else.’

In October, the team published details of the receptor. What they have not revealed is how exactly it could be used to make a smart insulin. Whether that can really work is not certain. The basic idea has been around for years: by somehow connecting a glucose-sensing molecule to insulin, you can modulate its activity. ‘What’s been missing is the element that would do the binding,’ says Destecroix, which means no one has tried it out properly. Other molecules can bind glucose, but they have big drawbacks. Boronic acid-based receptors, for example, get degraded by hydrogen peroxide in the blood. And concanavalin A, a sugar-binding protein from plants, is highly toxic to humans.

Davis and Destecroix can’t discuss how the smart insulin might work under the terms of the deal with Novo Nordisk. ‘But they are confident they can succeed, otherwise they wouldn’t have paid so much,’ says Davis. Ziylo’s staff have all transferred to a new firm called Carbometrics, which will collaborate with Novo Nordisk to develop the smart insulin and also has rights to develop non-therapeutic glucose sensors using the technology.

Destecroix remains ambitious. Carbometrics is now funding several PhD students at Bristol doing ‘more blue sky stuff’, he says. One idea is to design receptors for sugars, or polysaccharides, with less regular shapes than glucose. Every cell in the human body is decorated with a complex sheath of sugars called the glycocalix. When people get cancer, the composition of that sheath changes. So a receptor that can detect those changes might highlight cancer early.