Shape-shifting material flowers without a trigger

A hydrogel that can be pre-programmed to change shape without external triggers has been developed by materials scientists in the US. They say it might be useful for making biomedical devices that unfold by themselves after being implanted into the body.

Shape-memory materials, which can return to their original form, work because they contain two types of bonds – permanent ones that determine the original shape, and short-lived links that are used to fix temporary shapes. The shape-memory effect usually requires a trigger such as heat or a change in pH to break the temporary bonds and kick-start the process.

But the hydrogels developed by Sergei Sheiko and colleagues at the University of North Carolina can undergo a series of shape transformations that are completely programmed in advance. The changes are driven by the counteracting forces between two bonding networks within the hydrogel, Sheiko explains: a permanent covalent network and a dynamic hydrogen-bonded network. ‘In our case, [the] temporary network is dynamic,’ he says. ‘The crosslinks break and reform in real time … they temporarily fix a programmed shape and then control the recovery rate of the original shape.’ The shape transformations can also be pre-programmed to occur over a certain timescale. 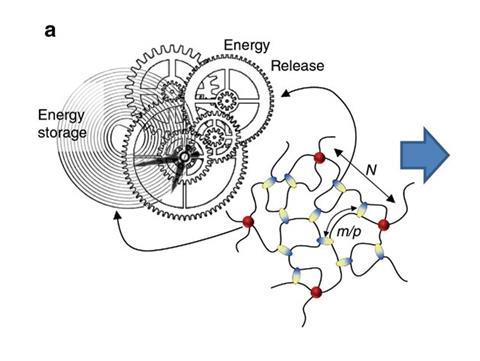 The group were able to build complex structures out of Lego-like blocks of the shape-shifting material that morphed at different rates. ‘We were quite surprised that even though these pieces are made of identical material, their actuation can be separated in time on scales from minutes to hours,’ he says. ‘[And] since the dynamic crosslinks are reversible, we can repeat the programming–recovery cycle many times.’

The team also built a hydrogel flower whose petals opened sequentially over time, just as they would in nature. They are hopeful that similar materials could be used to construct useful biomedical devices. ‘We can design implants that can be programmed to alter shape after insertion into body,’ says Sheiko. ‘The shape will change spontaneously, sequentially and at a predetermined rate.’

Mitchell Anthamatten, who works on shape-memory polymers at the University of Rochester, US, says that although the materials are unique in not needing a trigger there are limitations. ‘For example, most of the experiments were conducted in silicon oil,’ he notes. ‘In open air, humidity and temperature should affect the hydrogen bond dynamics, lowering reproducibility. ‘Another limitation is the sharpness of the transition. Shape-recovery rate and delay time cannot be predetermined independently; longer delay times connected to slower shape-recovery rates.’

Sheiko acknowledges there is further work to be done. ‘One unresolved question is how to encode a delay time,’ he says. ‘We have tried and failed to develop polymer networks that remain stable for some time prior to shape transformation. Programming a sequence of multiple shapes is another challenge.’