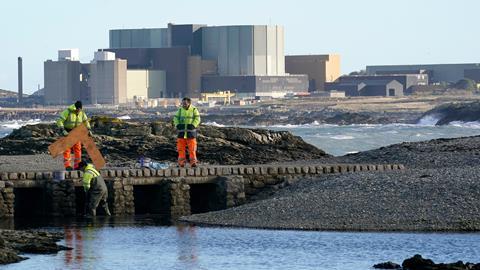 On 17 January 2019, Horizon Nuclear Power, the Hitachi-owned subsidiary responsible for the Wylfa project, put all construction at the site on hold. The £15 billon 2.9GW nuclear power plant was to have a 60-year operational life. Hitachi also scrapped plans for another reactor at Oldbury.

Hitachi has already invested around £2 billion into the Wylfa project prior to the announcement, with the UK government offering to invest £5 billion. But spiralling costs led to doubts that the project would survive through financing negotiations.

‘Negotiations had been going on for about six months,’ explains Tom Greatrex, chief executive of the Nuclear Industry Association. ‘Although the UK government has got to a point of what it would agree to, and Hitachi got some investment in place, there wasn’t enough.’

Simon Taylor, an economist with the Energy Policy Research Group in Cambridge, UK, agrees with Greatrex, but says it is unclear why the Wylfa project has ultimately stalled. ‘I can only assume that they wanted the government to take more of the risk – particularly the construction risk,’ he says.

The recent troubles at Toshiba may also have encouraged Hitachi to limit the risk it was exposed to, according to Taylor. Last year Toshiba announced it would end all new global nuclear projects, including a planned site at Moorside in Cumbria. The company had invested £400 million in Moorside before pulling out in response to its US nuclear division filing for bankruptcy.

Such failures highlight one issue with a new nuclear project, explains Taylor: ‘[It] is extremely expensive and it involves a lot of risk.’

Financial risk is an inevitable part of large infrastructure projects, but the nuclear industry has a unique set of challenges to overcome. Taylor explains that even if a firm’s reactor has a proven track record, it must make design modifications to satisfy local regulators. This forms part of the UK’s Generic Design Assessment (GDA) – a rigorous review process that can last years. The GDA for Hitachi’s Wylfa reactor was completed within four.

Once the GDA is signed off and the site approved, only then can a firm begin to build its power plant. But, under current UK policy, the high costs associated with construction lie solely with the company. The final construction bill for the Wylfa plant was to be an estimated £15 billion.

To mitigate this financial risk, the UK government has offered new nuclear investors a large financial incentive in the form of contracts for difference. Under the scheme, the government and investor agree on a set electricity price over 30–35 years. If the market price falls below this value when the plant is generating electricity, the consumer will foot the bill.

‘That gives you certainty over the future revenue,’ says Taylor. The reported strike price agreed for Wylfa was around £75/MWh – over £20/MWh higher than the government’s set price for offshore wind. Taylor goes on to explain that high strike prices are difficult for the government to reconcile when offshore wind costs have been falling.

Such arrangements have been heavily criticised in the past. In 2012, the government offered EDF Energy a £92.50/MWh strike price as part of a deal to build a plant at Hinkley Point in Somerset. Construction has started, but the project has suffered from delays, escalating costs and a legal challenge from Austria, which an EU court rejected last year. Despite these setbacks, EDF claims it is on target to open the reactor in 2025.

Even with similar incentives and government investment in Wylfa, the financial risk was still too high for Hitachi. The firm claims it is working to find solutions, with its chairman suggesting the UK government should offer a majority stake, nationalising the project.

Yet the UK may now offer an alternative funding plan initially penned for nuclear builds after Wylfa – the regulatory asset base (RAB) model. This model is the foundation for ongoing infrastructure projects such as the Thames Tideway Tunnel – a 25km ‘super sewer’ running under central London.

A RAB model regulates a rate of return for investors during a power plant’s construction. ‘It is more attractive to a greater pool of investors,’ says Greatrex. ‘The cost of capital associated with it is lower.’

This reduces the financial risk for investors and has an added benefit for the government. Such a package could allow the state to negotiate a lower electricity strike price as the investor will take on less capital risk.

However, the RAB model raises an important issue for the energy industry. ‘Why not use that vehicle to make all sorts of other technologies cheaper?’ asks Jim Watson, director of the UK Energy Research Centre. ‘The question … is why are you giving special treatment to one technology?’

Watson cites carbon capture and storage or the proposed tidal lagoon power plant in Swansea, UK, as capital-intensive technologies that could have benefited from RAB. Watson goes on to state that the government needs to be clear on what its strategic case is for nuclear: ‘In the end, you may be asking consumers to pay more for this technology versus others.’

Greatrex agrees that clarity from the government will ensure future nuclear projects are not at risk. ‘The most important thing is to have a framework that is appropriate,’ he says. ‘If it doesn’t happen, then we’re left in a situation where carbon emissions will go up [and] energy security will decrease.’