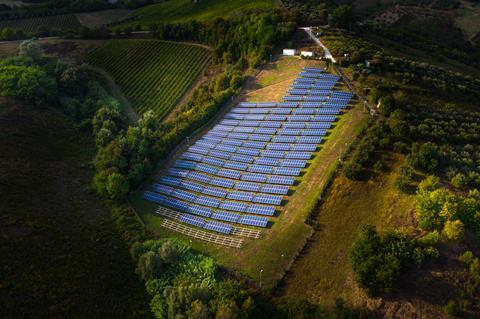 When it comes to creating a decarbonised power sector, photovoltaics fit the bill. A quick scan of recent developments in the industry is enough to buoy optimism: year upon year, solar pulls in money hand over fist, representing 42.5% of all investment into renewable energy in 2019. That’s mostly because nowadays, solar modules are cheap to make. But even with lowering costs and high investment, the deployment of solar modules is still not currently thought to be fast enough to meet climate targets for 2050.

Part of the challenge lies in improving efficiency, but the nature of the technology makes doing that tough. It’s been known since the 1960s that there exists a fundamental cap on efficiency for single-junction cells, known as the Shockley–Queisser limit – around 29% for commercial silicon cells. As researchers inch closer toward this theoretical maximum in the lab, more people are beginning to look for a way around the problem. And that’s where Cambridge Photon Technology comes in; the young company is developing new semiconducting nanostructures in an effort to circumvent the efficiency barrier.

‘If you have a solar cell that is always made up of some semiconducting material, that material has a fixed band gap – which means that every photon which has an energy higher than that band gap is absorbed into it to generate an electron–hole pair at a particular voltage,’ explains Akshay Rao, Cambridge Photon Technology’s chief scientific officer. ‘The problem is – let’s say for silicon, which has a band gap of 1.1eV – if you absorb a photon of 2eV, you essentially waste all that extra energy above the 1.1eV band gap.’ 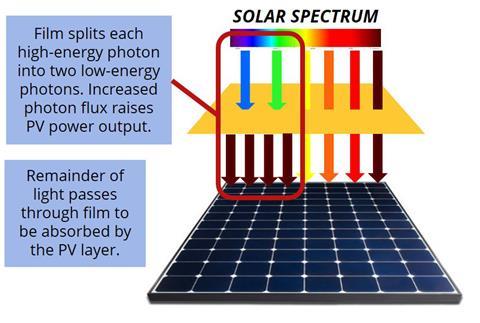 The film works by converting high-energy photons to pairs of lower energy photons, changing the spectrum that the cell can see

The company’s core product uses a process found in organic semiconductors called singlet fission: when a photon is absorbed by a semiconductor, it creates an exciton, wherein an electron is bound electrostatically to the hole it left behind – known as an electron–hole pair. Through singlet fission, one high-energy electron–hole pair can split into two lower-energy pairs with energy equal to the band gap. In 2014, Rao’s group at the University of Cambridge demonstrated that these electron–hole pairs could be harvested using quantum dots, enabling them to be converted back to light. It was that discovery that ultimately led to the formation of the company in 2019.

Now, the team are deep in R&D developing their product – the photon multiplier film. The film – an optical layer which slots into the stack of a typical solar module – is a pairing of an organic layer capable of singlet fission (a polyacene, such as tetracene), and a layer of quantum dots. When a high-energy photon creates an electron–hole pair, the film splits this into two lower-energy hole-pairs, which then diffuse to a layer of quantum, accept the energy and re-emit it as light. This effectively changes the spectrum that the cell ‘sees’, allowing it to harvest energy from a greater portion of the sun’s spectrum – and raises the power output by up to 20%, the company claims.

The company’s hard work was validated last year when it won the energy and environment category of the Royal Society of Chemistry’s Emerging Technologies awards. ‘In these ventures, it’s often a case of building upon small successes one step at a time and moving towards larger goals,’ says Rao.

A mix of funding from private investors and a series of grants has allowed the company to focus on building up their efficiency to the point that they hope to be able to carry out proof-of-concept demonstrations with partners in the industry within 18 months. With such a new and high-risk technology, those initial proof-of-concept tests will be important in derisking future investment. ‘It requires patient investment because this isn’t something that one brings to market in a year,’ says Rao. ‘We’re looking at a five-year journey.’ 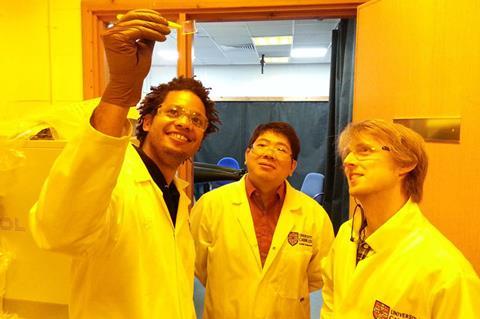 Cambridge Photon Technology and University of Cambridge scientists in the lab

With the market for such a technology being so large, Cambridge Photon Technology isn’t alone in its efforts. Among other leading candidates in the area are silicon-perovskite tandem cells – while silicon converts mostly the red end of sunlight into electricity, compounds based on perovskite can target the higher-energy blue end, raising the efficiency limit from 29% to around 40%. Rao believes, however, that his company’s product offers a simpler, more sustainable solution.

‘One of the downsides with silicon-perovskite tandem cells, is that perovskites are based on soluble lead compounds and so there’s a high environmental risk associated. That would require very careful recycling at the end of the cell’s life, and also very careful containment of the lead during operation,’ says Rao. Exploring their own product’s toxicity, Cambridge Photon Technology partnered with a major glass manufacturer to conduct leaching tests, smashing their film to bits to ascertain how much of the heavy metals can end up in the soil. They claim that leaching was at an undetectable level. Rao suggests that the ease of integration that comes with their film will make it more attractive to manufacturers: ‘We don’t need any new equipment added in, we don’t need a new kind of cell architecture.’

Origin: Spin-out from the University of Cambridge