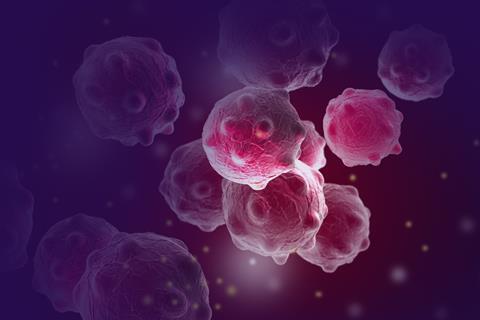 The time may have come to replace the current gold standard method for detecting cancer microRNA in patient samples. Scientists in France have developed a method that is simpler and more accurate than RT-qPCR (reverse transcription quantitative polymerise chain reaction), and that could be developed for doctors to use in a clinic.

The method, developed by Niko Hildebrandt from the University of Paris-Sud and colleagues, uses time-gated Förster resonance energy transfer (TG-FRET), during which energy transfers between two fluorescent dyes that are near to each other. Energy is only transferred when a specific disease marker is present, causing a fluorescent response. To increase the method’s sensitivity, Hildebrandt’s team coupled TG-FRET with an amplification process called rolling circle amplification. ‘This means we have the energy transfer for detection, and amplification to give us more signal. These two together allow us to have very low detection limits and a simple assay that we can do on a clinical plate instrument that already exists in some clinics and means [this technique] would be directly applicable to patients,’ explains Niko. 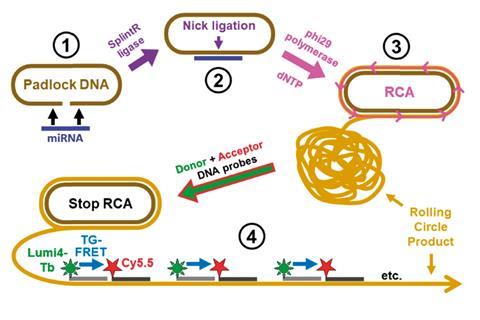 After specific recognition of miRNA by a linear padlock DNA (1), the DNA padlock nick is ligated over the miRNA target splint using SplintR ligase (2) and the miRNA becomes a primer for phi29 polymerase to synthesise and displace complimentary DNA around the circularised padlock DNA (3). After stopping rolling circle amplification (RCA), the rolling circle product (RCP) is incubated with Tb donor and Cy5.5 acceptor labeled ssDNA, which hybridise to specific sequences that exist more than 1000-fold on the amplified RCP concatemer. The close distance of Lumi4-Tb and Cy5.5 in the RCP allows for Tb-to-Cy5.5 FRET, which is not possible if both are free in solution. Thus, the TG-FRET signal can be used for quantifying miRNA without any washing or separation steps

Finding cancer as early as possible gives patients the best chance of survival. This technique would provide clinicians with information on cancer type and stage with significantly better sensitivity and specificity than current processes. The group tested their technique on real tissue and plasma samples, and showed that it was much better than the gold standard RT-qPCR, with 62% of samples being found to have cancer biomarkers exceeding healthy levels, compared to only 17% when using RT-qPCR.

Allison Dennis an expert in FRET and biomedical engineering at Boston University, US, says Hildebrandt’s group is a leader in lanthanide-based time-resolved FRET. ‘They have pushed beyond nice photophysical demonstrations of FRET, and focused on real world applications.’ Discussing the simplicity and applicability of this method, Dennis notes that the group has managed to mitigate the side reactions found in clinical assays. ‘From an application standpoint, you don’t have to clean the samples before use … this is a huge advance, which helps to make things more accurate and reliable.’

The group want to push forward by carrying out a larger clinical study with more patients. They also hope to combine the technology with fluorescence imaging to locate cancer microRNA in cells.