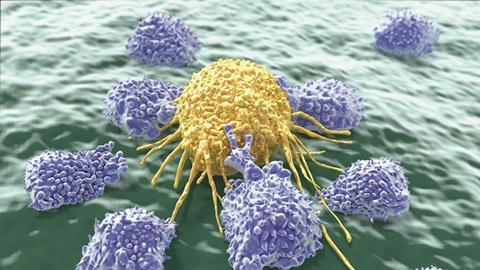 With their dying breath cancer cells expel large amounts of potassium, suppressing the body’s immune system and helping to protect the tumour from destruction. This discovery could help scientists develop new strategies to treat cancer by harnessing the body’s own defences.

Cancer cells multiply rapidly, quickly overpopulating areas. This leads to dense areas of cellular apoptosis and necrosis in the tumour. Although T-cells should clean up the area around the tumour, their functions are often suppressed.

The team led by Robert Eil and Nicholas Restifo from the National Cancer Institute in the US found that potassium ion concentrations in isolated extracellular tumour fluids were between seven and 10 times higher than in serum, both in mice and humans. High extracellular levels of potassium stop T-cells from working properly, as it can suppress a handful of biochemical reactions such as phosphorylation, cytokine and interferon production, and transcription.

The team hypothesised that eliminating excess potassium could help T-cells fight cancer. By creating genetically modified lymphocytes with extra potassium channels, the scientists showed that the T-cells recovered most of their function around tumours as they expelled intracellular potassium much more efficiently.