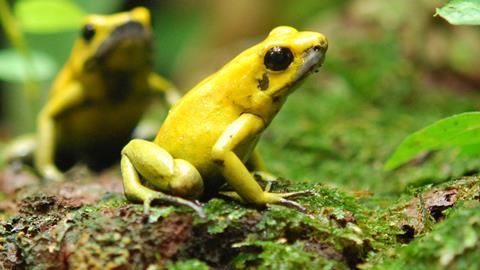 Scientists have revealed how it is that poison dart frogs can produce and store large quantities of neurotoxin without coming to any harm themselves. 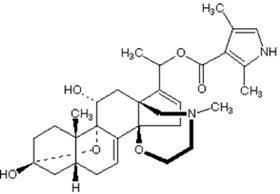 It turns out that this frog is protected against the toxin because of a point mutation within a single amino acid in its own version of the sodium channel protein. 1

Last year, David Cannatella’s lab at the University of Texas, Austin, published genetic sequences from more than a dozen poison dart frogs, including the regions known to contain the BTX receptor.2 They identified five amino acid mutations from computational studies that could be responsible for auto-resistance to frog toxins.

The authors of the new research assumed that all of these amino acids would play a role. ‘We thought that [substituting] each amino acid will perhaps give rise to an intermediate BTX-resistant phenotype,’ says Sho-Ya Wang, from the State University of New York at Albany, US.

Wang and colleagues mutated the five amino acids in rat muscle sodium channels individually and in combination, but discovered just a single mutation – changing an asparagine residue to threonine – conferred resistance to the poison without altering the gating properties of the channel. This change can be achieved by swapping a single base pair in the coding DNA sequence.

’It appears that this native asparagine residue is an important part of the BTX receptor and could be a potential target site for novel pain therapeutics,’ says Wang. She adds that it is unclear why a switch from asparagine to threonine alters the BTX binding so drastically.

‘Voltage-gated sodium channels are of great interest from medical, public health, and agricultural perspectives,’ comments evolutionary biologist Rebecca Tarvin, who is part of Cannatella’s lab. ‘Genetic mutations in these proteins can result in a variety of diseases, so understanding what types of mutations occur naturally and what their physiological consequences are can advance targeted drug therapy.’