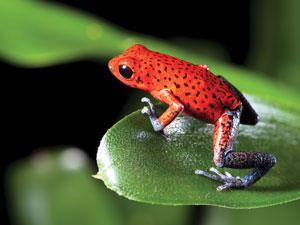 This week, we fear the frog, thanks to Stephen Wallace.

You may have been fooled, as I initially was, into thinking that the small tropical frogs that you see in the reptile house of the zoo are as innocent and harmless as they are exotically coloured. The colloquial reference to this family of anurans as ‘poison dart frogs’ begins to hint towards their more deadly attributes and biochemistries. These frogs biosynthesise a range of complex polycyclic nitrogen-containing compounds called alkaloids as a means of chemical defence, and these possess deadly biological properties. 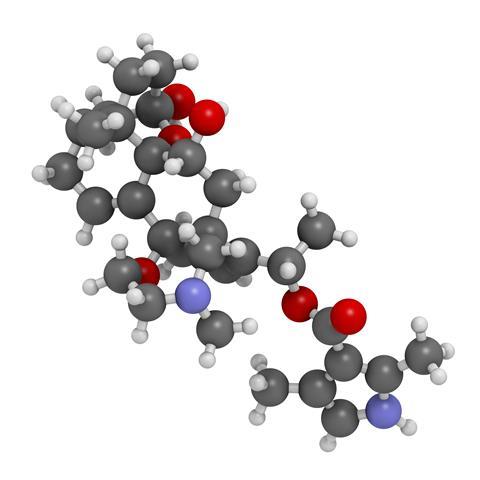 In fact, amphibians have provided scientists with a diverse array of over 800 biologically active alkaloids that are as yet completely unknown elsewhere in the natural world.

However, it is one particular defence toxin of one particular frog – Phyllobates terribilis – the golden poison frog, that is to be feared the most. This particular frog is native to western Colombia and is considered by many to be one of the most poisonous animals in the world. The neurotoxin it produces is a polycyclic steroidal alkaloid called batrachotoxin, derived from the Greek words for ‘frog’ and for ‘toxin’. Its chemical structure consists of a steroidal carbocyclic core – akin to that of cholesterol and testosterone – with the added feature of a transannular seven-membered oxazapine heterocylic ring. Batrachotoxin is released by these frogs in response to agitation, pain or an external threat, whether that be a potential predator, adversary or even a curious human being, where it is reflexively released in milky secretions from secretory canals and glands located on its back and behind its ears.

This compound is a remarkably effective means of defence with deadly consequences to its prey. For example, just one hundred millionths of a gram of batrachotoxin, the equivalent of two grains of table salt, is sufficient to kill a 68kg human being. To put this in context, this is more toxic than the famously deadly curare and tetrodotoxin that are found elsewhere in nature, and is over 1000 times more poisonous than cyanide. On average a single frog will harbour around 10 times this lethal dose beneath its skin at any one time. Upon exposure to batrachotoxin, death is most likely to be unavoidable, and will result from uncontrollable convulsions, heart failure and/or suffocation in less than 10 minutes. There is no effective antidote for batrachotoxin poisoning.

Batrachotoxin’s lethality is achieved through permanently blocking the transmission of nerve signals to the muscles. It has a particularly severe effect on the heart, where it permanently interferes with conduction, causing arrhythmias, ventricular fibrillation and eventual cardiac failure. These dramatic effects on nerves and muscles are caused by a huge intracellular rush of positively-charged sodium ions, but also larger ammonium, potassium and caesium ions resulting in a huge depolarization of the nerve membrane. The effect of this is that neurons are no longer able to function, resulting in paralysis.

What is particularly interesting is that when these frogs are bred in captivity they are completely harmless, and when they are caught in the wild and removed from their native habitats the amount of toxin that they produce diminishes significantly over time. This observation has led to the currently accepted theory that batrachotoxin, and related toxic alkaloids, originate either exclusively or partially from the frog’s diet in its native habitat. Although the exact dietary origin of batrachotoxin is currently unknown, it has been suggested that it may originate from small arthropods, such as the melyrid beetle, also native to Colombia. Coincidentally, batrachotoxin has been detected in a songbird found in Papua New Guinea, which also feeds on the melyrid beetle. However, biologists agree that it would be extremely unlikely for this beetle to be able to biosynthesise a complex steroidal-based toxin such as batrachotoxin, and as such it is believed that the melyrid beetle also accumulates batrachotoxin, or its precursors, through its diet of smaller arthropods or even plants.

We have only started to realise the diversity and potential utility of amphibian, reptilian, botanic and mammalian defence molecules in modern-day medicine. As such, synthetic chemists around the world continue to devise new chemical reactions and syntheses that aim to reproduce these molecules in a laboratory setting. By achieving such goals it could perhaps be possible to create antidotes for these natural toxins, or to develop methods to alter their chemical structure, transforming them from natural killers into modern-day therapeutics.

Stephen Wallace from the Medical Research Council there, with the fatal chemistry of batrachotoxin. Next week, we move from frogs to molluscs and things get a lot more colourful.

Purple dye was made by collecting hundreds – or potentially thousands – of molluscs and extracting from them a special mucus. This mucus was the source a green, bromine-containing compound called tyriverdin, which decomposed in light to produce dibromoindigo, or tyrian purple.

Discover how synthetic chemistry changed this practice to enable us all to be draped in purple by joining Hayley Birch in next week’s Chemistry in its Element. Until then, thank you for listening, I’m Meera Senthilingam.