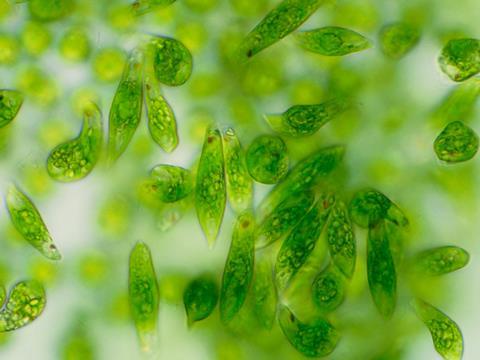 The pond algae Euglena gracilis has a surprising wealth of metabolic pathways for unexpected natural products, new research shows. Genes from this common single-celled organism could therefore be manipulated to synthesise a host of unusual, and potentially useful, compounds.

Euglenoids are a group of algae that grow abundantly in nutrient-rich freshwater environments, such as garden ponds. Euglena gracilis is known to produce many nutritional compounds including vitamins A, C and E, essential amino acids and polyunsaturated fatty acids. However, sequencing its genome in a bid to unlock these valuable natural products has proved very challenging due to its large size, complexity and incorporation of the unusual nucleotide base J.

Researchers, led by Rob Field at the John Innes Centre in the UK, have tackled this problem by instead looking at Euglena’s transcriptome – the mRNA transcribed from the genome that shows what genes an organism is using at a given time.

The results are intriguing: this single celled organism possesses over 30,000 protein-encoding genes – significantly more than the 21,000 found in humans. Only a third of these genes were constantly active, while the rest seemed to be light-responsive. ‘Around 10,000 genes are switched on when the lights are on and 10,000 switched off, so it’s almost as if Euglena is two different organisms living in the same chassis,’ explains Field. A vast number of genes – nearly 60% – had no known match in other studied organisms, meaning we simply don’t know what they do.

There were some revelations among the genes that could be identified too, including unexpected genes for the production of a variety of potentially useful classes of natural products that have not been associated with Euglena before, such as polyketides and non-ribosomal peptides. This is a very interesting finding according to Wilfred van der Donk, a natural products biochemist at the University of Illinois, US, because ‘products of these types of genes have seldom or never been isolated from these organisms. Thus, these findings open the door to isolation and structural elucidation of these compounds, and investigation of their function.’

This transcriptome approach to studying Euglena could be applied to other related organisms too, such as algal blooms suffocating parts of the UK’s Norfolk Broads. Taking what they’ve learned from Euglena, Field’s group have now begun to study how algae produce toxic natural products and what environmental factors might trigger this production.