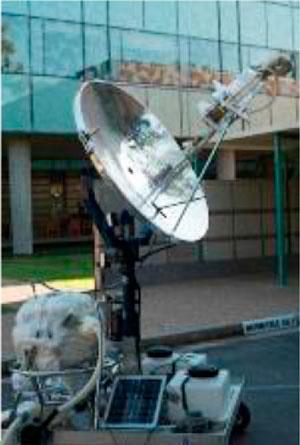 It sounds like the most desirable machine in a ‘steampunk’ laboratory: a solar-powered autoclave that sterilises using light-harvesting nanoparticles that blast out steam. The system, however, could allow doctors and dentists in the developing world to sterilise their equipment in environments where infectious disease is often rife.

Steam autoclaves eradicate pathogens from surfaces and liquids through a blast of high temperature pressurised steam at about 115°C. Their efficacy depends on temperature and exposure time. Unfortunately, generating high temperature steam under pressure needs a lot of energy. However, light-absorbing nanoparticles, made from metallic nanoshells, nano-aggregates or carbon nanoparticles dispersed in water, can absorb a wide-range of solar frequencies and act as photothermal heaters to produce a pathogen-killing blast of steam in a standalone device.

Naomi Halas of Rice University, US, and colleagues, who developed the solar-powered autoclave, explain that as the nanoparticles absorb sunlight a temperature gradient is established between their surface and the water in which they are suspended because of reduced thermal conductivity at the interface between the two. This inevitably leads to the formation of vapour at the interface and the nanoparticles rapidly bob to the surface of the liquid expelling the vapour vigorously as high temperature steam. This occurs without the bulk of the liquid ever approaching the boiling point of water. Indeed, if the vessel containing the nanoparticle suspension is held in an ice bath, the photothermal effect still leads to the expulsion of hot steam.

Initial tests demonstrate that the autoclave can kill the standard test microbe Geobacillus stearothermophilus, which is found in hot springs and can survive temperatures up to 75°C. The researchers also point out that the process doesn’t damage the nanoparticles, so can be used again and again.

‘I think the nanoparticles are pretty awesome, in particular because the whole system can be “run” by normal sunlight,’ says Peter Wich of the Johannes Gutenberg University Mainz, Germany. ‘Normally lasers are used to heat up local nanoparticle accumulations.’ The work builds on the team's earlier work in which they describe the particles themselves in more details. ‘The main focus this time is on the practical approach to autoclave waste material. They even built two working solar sterilisation units – such “real-life” application is often missing in research papers.’