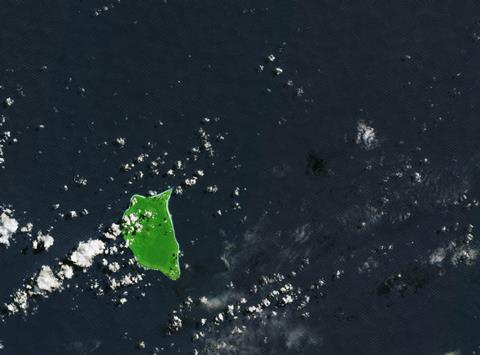 Henderson Island lies in the South Pacific, about halfway between New Zealand and Chile making it one of the most remote places on Earth. However, while this remote, uninhabited, tiny landmass may look idyllic and untouched by humans, it’s one of the most plastic-polluted places on Earth with plastic washing up on its shores daily. It is hoped that the new satellite technique to spot plastics will help to tackle oceanic pollution by establishing where the waste is coming from

Satellite images can now be used to detect small patches of plastic litter floating in coastal water, thanks to the unique way they reflect light.1

The ‘spectral signature’ of the floating plastics distinguishes them from natural materials, like seaweed and timber – and the method is sensitive enough to spot plastics floating among natural materials in patches smaller than 10m across.

Lead author Lauren Biermann, a biogeochemist at the Plymouth Marine Laboratory, UK, says the method detects floating patches containing macroplastics – like plastic bottles or pieces of polystyrene foam – that are destined to degrade into even smaller microplastics.

Scientists have identified microplastics – defined as fragments that are less than 5mm in length – as a pollutant in ocean ecosystems, and floating macroplastics are where most come from. ‘Whatever you are spotting as a macroplastic is eventually going to become a microplastic and contribute to the global load,’ Biermann says.

Two recent studies from the British Antarctic Survey have highlighted the problems of plastic pollution floating in the oceans.2,3 One found that plastic debris, including fishing gear and litter, has been washing up on beaches in the sub-Antarctic regions of South Georgia and the South Orkney Islands for at least 30 years. Another reported that sub-Antarctic seabirds, such as the wandering albatross and the giant petrel, often mistake pieces of plastic litter for prey, and eat them.

And a new study from the University of Manchester shows how microplastics that eventually sink to the seafloor can be concentrated by currents.4 It reports a thin layer of 1.9 million pieces of microplastic in a single square metre of seafloor in the Tyrrhenian Sea, west of Italy – the highest level of seafloor microplastics ever recorded.

Macroplastics can be distinguished in satellite images from other floating objects mainly by what they don’t do. Plants like seaweed reflect many of the same light wavelengths, but plastics don’t show activity in at the ‘red edge’ of the near-infrared spectrum – a marker for plants’ chlorophyll. ‘It’s quite distinctive,’ Biermann says. ‘It’s more about the lack of photosynthetic activity … what you’re looking for is an absence of that.’

The detection method was partly based on Instagram photographs of floating plastic pollution after a storm in South Africa’s Durban Harbour in April 2019, which enabled Biermann to identify plastic patches in satellite images taken that day. Similar observations of floating plastics could help refine the method, she says, which has been tested in satellite images from the coasts of Ghana, Scotland, Vietnam and western Canada.

‘The more awareness we raise about this, hopefully the more people will say “I took a photo of this plastic patch when I was out on my boat … and it was on this day, at this time”,’ she says. ‘That is like gold.’

Biermann has trained a machine learning algorithm to scan images from the European Space Agency’s Sentinel-2 satellites, to automatically identify floating patches with a significant amount of plastic – as little as 10 or 20% of a 10-metre-wide pixel, she says. Ultimately, it could be used to create global maps of floating plastic hotspots in the oceans, to enable clean-up operations and to learn more about how the plastic patches form, she says.

Environmental scientist Arturo Castillo Castillo, of Imperial College London, who was not involved in the study, says automated detection of plastic patches from satellite photographs is promising, but could be improved. Among other issues, ‘they need to validate that what is identified as plastic actually is plastic’.

The next step will be to use the satellite photographs to determine where floating patches of plastic litter originate and to take measures to reduce them, he says. ‘How do they move, how do they end up where they end up – but more interestingly, where do they come from?’