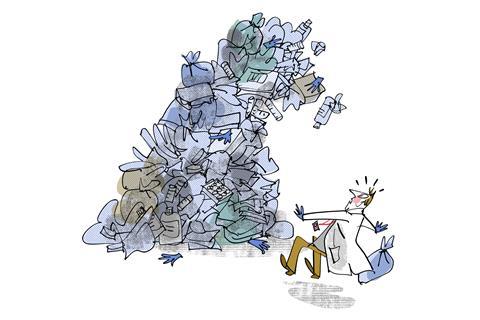 A pipette tip here, a nitrile glove there – lab waste soon piles up

Being part of the scientific community means surrounding yourself with different scientists from all over the world for a large part of your life. This might lead to the impression that there are multitudes of us. Yet, according to Unesco, only 0.1% of people are scientists.

However, there is one area where we make a much bigger impression on the world than our numbers would suggest: plastic waste. A study from the University of Exeter, UK, has estimated that life scientists alone create approximately 5.5 million tons of plastic waste annually, which accounts for approximately 2% of the plastic waste produced worldwide. How much waste other scientific fields add on top of this does not appear to be known. Through our research, we scientists are unintentionally contributing to the detriment of the world and the very lives we are attempting to improve.

To raise awareness of this issue, members of the eLife ambassador programme organised a global Lab Waste Day on Twitter on 17 September 2019. Under the hashtag #LabWasteDay, scientists shared pictures of themselves with all the plastic waste they had generated during one day of lab work. On average, the scientists who took part produced 300–400g plastic waste in one day, which equates to 70–100kg per year (assuming the participants don’t work weekends). One scientist even accumulated 3.41kg of waste in just one – as she said, not extraordinarily laborious – work day.

Seeing a visual representation of the sheer amount of waste we and others generate on a daily basis was eye opening. We realised we had to push harder not only to reduce our own waste, but also to change the mentality of people around us and the institutions we work for.

Changes need to occur on many levels. Producers need to limit packaging, and institutions can do more to promote green science. But ultimately every scientist has the responsibility to plan experiments thoughtfully and optimise material use. This is something you can start thinking about, even if you’re currently not able to perform experiments due to Covid-19-related shutdowns. The principles are the same as you’d use to cut down on waste at home: reduce, reuse, recycle.

One way to reduce plastics in the lab is to consider using more glassware. Even though the initial purchase cost might be higher, glassware is cheaper in the long run. For example, 30ml autoclavable glass tubes are about 10 times the price of a single plastic falcon, meaning they save money from the 11th use onwards. While glassware production and recycling requires a large amount of energy, this is less than what is required for plastic. Furthermore, plastic incineration exerts a tremendous toll on the environment. Therefore, overall, a repeatedly used item of glassware has a lower environmental impact than its plastic equivalent.

For those items that have to remain made of plastic, you can still reduce the amount of waste you produce by carefully designing your experiments – by using smaller size tubes to limit the overall weight of plastic discarded, for example. Practice good laboratory management, and don’t order unnecessary plastic products that will never be used. If you do end up with a surplus, donate them to other researchers at your institute. Sharing is caring after all.

Some plastic items often treated as disposable can even be reused with a little effort. Autoclaving sterilises used plastic flasks and dishes, and pipette tips can be used more than once if the lab has a pipette tips washer.

And when a plastic item reaches the end of its life, recycle it. Check the recycling capabilities of your institution, as it’s not just packaging that can be recycled. Schemes like RightCycle by Kimberly-Clark Professional recycle nitrile gloves, StarLab tip boxes can be reused by the company up to one hundred times if returned, and the polystyrene boxes used to ship items are taken back and reused by companies like New England Biolabs.

Measuring how much waste you produce can also help motivate you and set targets for reducing plastic waste, as we found when looking at the #LabWasteDay results. If you’re really serious about reducing your environmental impact, encourage your lab to join a sustainability scheme like the University College London Laboratory Efficiency Assessment Framework (Leaf). Through this you can assess your lab’s performance and follow good practice to become a more green and cost efficient unit.

Lab waste reduction is nontrivial, but it is also not mission impossible. The University of Leeds and University College London, both in the UK, have pledged to break free of single use plastic by 2023 and 2024 respectively. Additional laboratories and institutions need to follow suit in order to create meaningful change on a global level. But to be successful, we all need to play our part.

We will not eliminate all plastic waste immediately, but by taking some of the steps mentioned above we can certainly reduce the amount of waste we generate. We hope we’ll see you with some nearly empty waste bags at the next #LabWasteDay.