Air pollution in the metro system of Chinese city Suzhou is responsible for up to 375 premature deaths each year, new research shows. However, the scientists behind this work say that increasing tunnel humidity could cut this number by 20%. 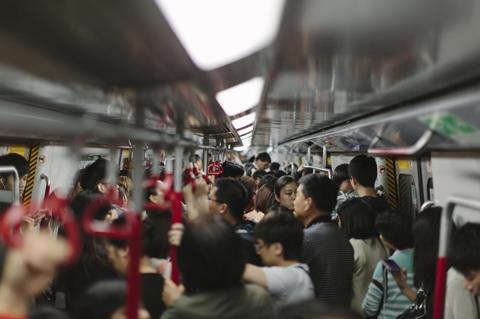 Airborne pollutants, including nitrogen dioxide and particulate matter smaller than 2.5µm in size (PM2.5), can cause respiratory and cardiovascular diseases. Friction between brakes and train wheels generates these molecules in subway systems, where poor air circulation means they accumulate. On average, subway passengers in Suzhou commute for 43 minutes each day, and with China building more and more subway lines, it is important to measure their exposure to pollution.

Scientists from China, Japan and the US therefore set out to monitor airborne pollutants at different times of day and year throughout Suzhou’s subway system. The team recorded more air pollution in underground stations than ground-level stations, and less in carriages than on the platforms. Modelling this data in a system that characterises the impact of chemical emissions suggested that exposure to such levels of pollution could be responsible for as many as 1% of deaths in Suzhou each year.

Importantly, they also found a significant link between higher humidity and lower levels of PM2.5. ‘We all know that by increasing the humidity level it can decrease particulate concentrations, but we didn’t realise it had such high impact,’ says Shi-Jie Cao of Soochow University, lead scientist on the project. Water sprayers in the subway tunnels could be the answer.

Cao hopes that their work will highlight how serious subway pollution really is. Commenting on the work, environmental modelling expert Ralph Rosenbaum, from the French National Science and Technology Research Institute for Environment and Agriculture, Irstea, says ‘It will hopefully motivate public investments and launch legislation initiatives to improve the situation and minimise risks.’

Correction: This article was updated on 29 March to clarify the nature of the health impacts reported.