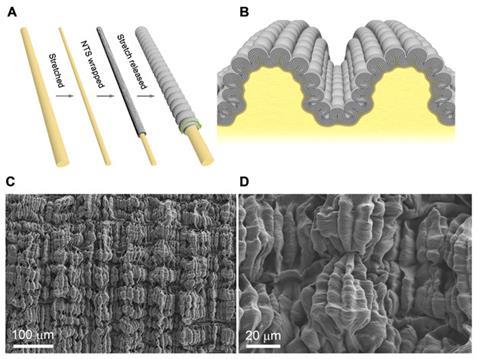 A conducting wire that can be stretched to 14 times its original length has been developed by scientists at the University of Texas at Dallas, US. They say it could find use in flexible electronics devices and artificial muscles, as well as other devices such as giant deformation strain sensors.

Ray Baughman and colleagues fabricated super-elastic, conducting fibres by wrapping carbon nanotube sheets oriented in the fibre direction on to a stretched rubber fibre core of styrene-(ethylene-butylene)-styrene (SEBS) copolymer. These sheath-core fibres are highly elastic and can be stretched by 1320% of their original length.

Electrical resistance rises by a mere 5% or so when the wire is stretched to over 10 times its unextended length. However, by including other nanotube and rubber layers within, the team could change the fibre to a ‘fibre capacitor’ whose resistance increases by as much as 860% when it is stretched, a phenomenon that could see it turned into a strain sensor. Conversely, the team was also able to make a torsional artificial muscle fibre that might be used to pump liquids in medical devices or rotate mirrors in optical circuits.

Earlier research into super-elastic conducting wires that are not coiled have not survived being stretched more than five times their length without suffering from an untenable change in resistance. The present team's use of multilayer carbon nanotubes (CNT) derived from highly oriented multiwall aerogel CNT sheets is key to their success. By stretching the rubber core to 1400% its original length prior to wrapping the CNT layers around the core, the team was able to create a hierarchical internal structure. They could also apply a rubber sheath around the basic structure either with or without stretching to give them three basic structures that could be fine-tuned based on the number of layers of CNTs within.

When the stretch is relaxed the CNT layers buckle axially, and subsequent stretching causes  belt-wise buckling – both stretch and stretch-release generate short period and long period buckles that arise out-of-phase in these different dimensions. Using different rubber core and carbon nanotube sheath thicknesses, as well as applying a thin rubber overcoat and plying fibres together, allows the team to alter the initial resistance and other properties of their fibres.

The researchers show that by inserting twists into these straight fibres they can make tightly coiled fibres that can be stretched by more than 30 times their initial length with a negligible change in resistance. Such materials might find use in robotic arms or exoskeletons capable of extreme reach, or interconnects for highly elastic electronic circuits and as morphing structures for space exploration where delivery payload needs to be kept compact until deployment.

‘Our future plans are to make our demonstrated artificial muscles more powerful, by decreasing the diameter of the rubber core fibre and adding multiple carbon nanotube sheath layers that are each separated by thin dielectric rubber layers,’ Baughman says. ‘Also, we want to incorporate these sheath-core fibres into textiles and into rubbers to make super-stretchable morphing structures that can sense their own actuation.’