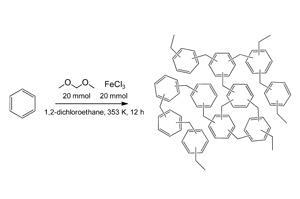 A porous polymer ‘sponge’ that absorbs carbon dioxide by swelling up has been developed by scientists in the UK. The team who made it say it could be used to reduce carbon dioxide emissions from power plants, as it is cheap to produce and outperforms other carbon dioxide sorbents under high pressure conditions.

‘There are lots of materials being investigated for pre-combustion carbon capture,’ says Andrew Cooper from the University of Liverpool, speaking at the 248th ACS National Meeting & Exposition in San Francisco, US. ‘But most studies so far involve dry CO2.’ In reality, he explains, the conditions in a power station are harsh, and carbon dioxide scrubbers are exposed to high pressures, water vapour and acidic gases.

‘While there are other materials, such as certain zeolites and metal–organic frameworks (MOFs), which show very high CO2 uptake under ideal conditions, their performance is generally very sensitive to the presence of water, which limits their use in any real process,’ says Peter Budd, a polymer chemist at the University of Manchester in the UK, who was not involved in this research.

By contrast, the ‘knitted benzene’ polymers developed by Cooper’s team are hydrophobic, so they don’t absorb water and their affinity for carbon dioxide remains high even in wet environments. They are also much cheaper to make. ‘We’ve used hyper cross-linking chemistry to knit benzene together into a network,’ says Cooper. ‘The chemistry is simple, scalable and doesn’t require precious metal catalysts.’

Cooper’s polymer absorbs carbon dioxide by physically swelling up like a sponge, and can later be ‘wrung out’ by decreasing the pressure to release the captured gas. The team compared its ability to absorb carbon dioxide, both pure and when mixed with hydrogen or nitrogen, against the commercial sorbents activated carbon and zeolite13x, as well as two of the most stable MOFs – HKUST-1 and ZIF-8. The benzene polymer outperformed all comers at a pressures of 4MPa, and carbon dioxide uptake was more than 50% higher than the next best performer, ZIF-8, under high pressure wet conditions. It was also superior in terms of stability, and even boiling it in acid – a process which ruined the other sorbents – didn’t change the structure or affect its absorptive properties in any way.

The polymer visibly swells as it takes up carbon dioxide

Cooper admits there may still be some challenges in terms of scaling up and translating the material into a usable product. The solvent used in the synthesis, dichloroethane, is difficult to work with on a large scale, and the swelling action of the polymer could potentially prove problematic. But he says the initial results are encouraging.

Budd agrees the water tolerance and stability of the benzene polymer are impressive. ‘Add the simplicity of the chemistry and the robustness of the products, and these materials show real promise for application,’ he says.