The multi-pronged search for Covid-19 treatments

The desperate situation of many patients with Covid-19, and the scale of the ongoing pandemic, has sparked interest in new experimental therapies, aiming to save lives and alleviate suffering. While early ideas around repurposing existing pharmaceuticals proved mostly ineffective (barring the steroid dexamethasone), more targeted approaches could yield powerful new drugs. A number of these treatments were already in clinical trials for other indications. 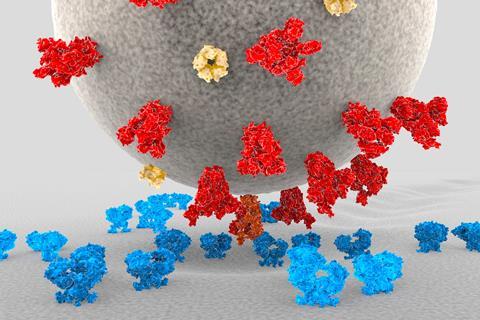 Therapeutic agents aim either to interfere with the ways the virus establishes an infection, or to control overactive immune responses and inflammation as infection progresses

There are two main strategies to treat Covid-19 patients: either stop the virus replicating, ideally soon after symptoms appear, or dampen a runaway inflammatory response later in the disease. ‘By the time people get to hospital, it isn’t so much the virus as the inflammatory response to the virus that is causing all the trouble,’ says Penny Ward, medical pharmacist at King’s College London, UK.

One promising approach, being developed by Pulmotect in Houston, US, combines two synthetic molecules: a lipopeptide called Pam and an oligonucleotide dubbed ODN. These stimulate different Toll-like receptors in frontline immune cells, which activates cells in the lung lining to a high state of alert for microbial attack. Those cells respond by producing antimicrobial peptides and reactive oxygen species.

‘When you inhale the drug, the epithelial cells act immediately to kill the invading pathogen,’ explains chief executive Colin Broom. ‘They also signal to the adaptive immune system, drawing macrophages and neutrophils into the lungs.’

The inhaled solution is in two phase 2 clinical trials. One for patients who have been exposed to Sars-CoV-2 but not yet developed an infection, and another for infected patients to see if symptoms are reduced. Earlier this year the company received funding for these trials from the US Department of Defense. The studies began in June last year and are expected to finish this August.

‘We can protect animals from a number of infections such as anthrax, Sars-CoV-1 and MERS virus, if you pre-treat before you give them the [pathogen] to the lungs,’ says Broom. ‘We believe that by inhaling [the drug] you can prevent the spread of the virus into the lining of the lung.’ This could make it suitable to administer during the first onset of symptoms.

‘The company has shown quite a lot of proof-of-concept in various animal models, of inflammatory lung disease and infections,’ says Ward, who adds that it could be used more broadly for pneumonias caused by viruses, including respiratory syncytial virus (RSV). Pulmotect began its research with cancer patients susceptible to lung infections due to their cancer treatment.

Closing the door on infection

Apeiron Biologics in Austria is investigating a recombinant form of angiotensin-converting enzyme 2 (ACE2). This imitates human ACE2, which is used by the Sars-CoV-2 virus to gain entry to cells. The virus binds to the soluble recombinant version, instead of ACE2 on cell surfaces, which means the virus can no longer infect cells. The company says it also reduces inflammatory reactions in the lungs and protects against acute injury. In May, it was chosen to be part of a US National Institutes of Health-funded trial of around 1600 hospitalised patients. It is also part of the Recovery+ trial in the UK. 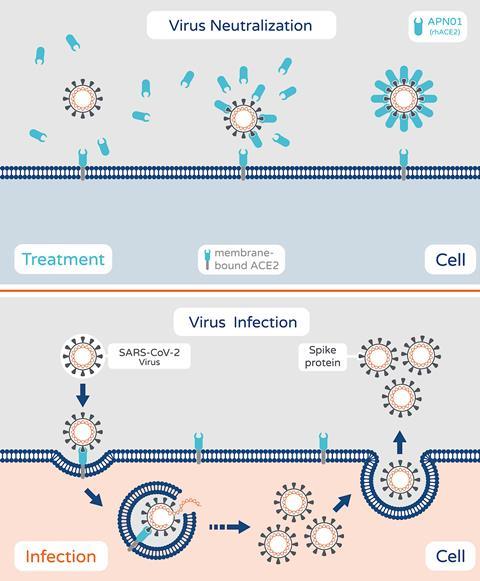 Apeiron’s engineered version of the ACE2 receptor protein stops the virus from binding to ACE2 on cell surfaces, effectively blocking its entry into cells

The recombinant protein (named APN01) was previously shown safe in a trial in patients with pulmonary arterial hypertension and acute lung injury. The company completed a phase 2 trial with 178 severely infected Covid-19 patients in Austria, Germany, Russia and Denmark in March 2021. The study was not large enough to show a significant decrease in deaths, but the drug reduced viral load in patients and the number of days without mechanical ventilation.

‘This would ideally be used quite early on as a delay mechanism for the virus,’ says Ward, ‘but unfortunately it is given intravenously.’ This makes it a practical challenge to administer to people in the community, most especially during an epidemic. ‘People would have to travel to an infusion centre,’ she adds.

Apeiron, however, now aims to test an inhalable version of the drug in healthy adults. This would allow it to be administered more easily to patients-at-risk, as well as asymptomatic people and those with mild infections. The trial is expected to start in September.

‘The logic would be to use this as early as possible for two reasons. One, it stops the disease spreading in the body,’ says Apeiron’s chief executive, Peter Llewellyn-Davis. ‘Number two, using this as a preventive measure opens up a much bigger market.’ He notes also that the mechanistic approach means that new variants of the virus would be just as susceptible, since Sars-CoV-2 and related coronaviruses all attach to ACE2.

BioAegis Therapeutics in New Jersey, US, is also using a recombinant version of a human protein to combat the virus. Gelsolin is abundant in healthy people’s blood plasma, but becomes depleted when the body suffers severe trauma or infection.

‘The lower the level that gelsolin drops to, the more likely that patients do not do well and develop complications in various organs,’ says physician Mark DiNubile, chief medical officer at BioAegis. He says that giving the protein to infected animals increases their survival and decreases tissue injury.

Gelsolin works as an immune modulator, with myriad effects on the immune system. In general circulation it can bind to pro-inflammatory proteins and dial down systemic inflammation, which is a major problem in patients severely ill with Covid-19. 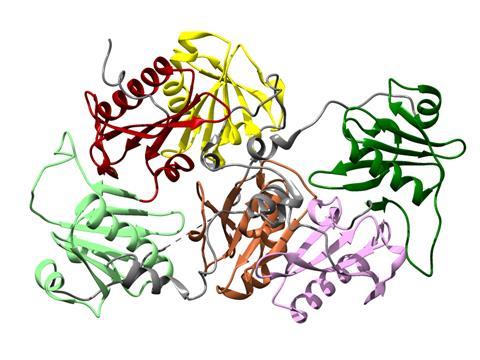 Gelsolin is part of the body’s natural defence system, but is depleted during infections. Replacing it helps dampen down the inflammatory immune response

‘The first onset of symptoms is associated with viral replication,’ says Ward, but if a patient’s condition worsens later, it is a problem of multi-system inflammation. ‘That manifests usually within five to seven days after the first onset of symptoms and people get sick pretty quickly.’ She notes that gelsolin is a ‘fairly abundant protein in healthy people and generally you try to produce more if you are under attack.’ She is hopeful that the recombinant protein from BioAegis could be administered quickly to hospitalised patients and improve their outcome.

The company has just completed a phase 2 trial in Spain and Romania of hospitalised patients with severe Covid-19 pneumonia, and analysis will begin shortly. The hope is that a larger US trial on severely ill Covid-19 patients will begin later this year.

Modulating the immune system is a useful strategy in hospitalised patients, but researchers in Australia are working on an approach that would sabotage the virus inside our cells and thereby prevent severe Covid-19. This relies on small interfering RNA (siRNA) delivered into cells using a lipid nanoparticle.

The researchers developed siRNA to target highly conserved regions of the Sars-CoV-2 RNA, so that the virus is unlikely to escape by mutating. ‘This is the only therapy I know that targets the actual genome of the virus and completely inhibits it,’ says Kevin Morris, molecular biologist at Griffith University in Queensland, Australia, who leads this research.

The siRNA packaged into lipid nanoparticles would be administered intravenously, make their way to the lungs and are removed from the body within about 24 hours, according to Morris. He adds that drug regulators and funders had for a decade been reluctant to approve lipid nanoparticles as delivery systems, but that has all changed since Moderna and Pfizer­–BioNTech used this system in their Covid-19 vaccines.

The nanoparticles encase double stranded RNA. On entering a cell, an enzyme (Argonaut II) unzips the two strands and takes one of them with it as it seeks out and destroys complementary sequences. Once it finds a match to this short string of 21 to 23 RNA nucleotides – in this case, the viral genome – the enzyme chops it up. The treatment was designed to work on all beta coronaviruses, which includes the original Sars and Mers viruses.

‘The RNA would be very specific to the virus. It doesn’t target anything in the human,’ says Morris. In a recent study, an injection of siRNA in lipid nanoparticles showed strong repression of the virus in the lungs of mice, which ‘conferred a strong survival advantage.’ Morris hopes that the RNA interference targeting Sars-CoV-2 can get into a phase 2/3 clinical trial by 2023.

The first therapy based on RNA interference was approved in 2018, when Alnylam’s Onpattro got the treat light to treat a rare, progressive disease involving abnormal deposits of proteins. Since then, this company has had two more RNAi drugs approved. However, there are no RNAi drugs on the market for an infectious disease. ‘This will be quite an interesting therapy,’ says Ward. ‘Since we are able to make RNA quite readily, with all the vaccines. But we are back to the same problem. It is [intravenously] administered.’

Ideally a drug targeting the virus would be given soon after a person tests positive or suffers symptoms, but those in the community are unlikely candidates for a therapy requiring repeated intravenous infusions. ‘All the studies suggest that the peak of viral replication happens within three days of the first onset of symptoms, so hence we need to treat early in the community when giving an antiviral drug,’ says Ward. ‘By the time people get into hospital, their disease is driven by an inflammatory response and the virus has already been brought under control by the body’s own immune system.’

Pfizer has begun a trial of a protease inhibitor that targets Sars-CoV-2 specifically. This binds to the crucial viral protease enzyme inside of cells, and prevents it from pruning the long protein chains into constituents that the virus needs to replicate. Protease inhibitors have previously been developed for HIV and hepatitis C. 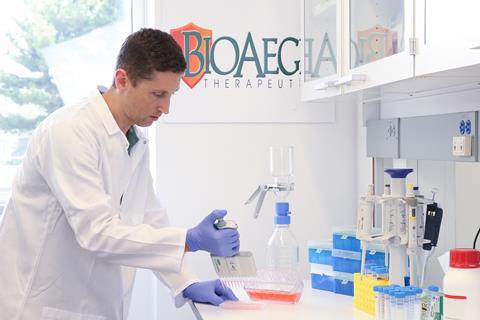 Another novel antiviral, in advanced clinical trials, is molnupiravir from Merck. This is a ribonucleoside analogue that hinders replication of multiple RNA viruses, including Sars-CoV-2. A large phase 3 study is ongoing in outpatients with Covid-19. In June, the US government pledged to buy approximately $1.2 billion worth of the drug (enough to treat 1.7 million people) if it receives regulatory approval or emergency use authorisation.

Ward says she is waiting for the results for this antiviral tablet, as this is the form of therapy needed for those not in hospital. Moreover, although the vaccines still work against the Delta variant, there remains a vulnerability that can only be filled by a new therapeutic.

‘Some virus variants could emerge that are not suppressed by the vaccines, in which case you really need an antiviral treatment that you can immediately give to protect people, while you are creating a new vaccine,’ says Ward. ‘Most trials to date have focused on dealing with severe Covid-19 and hospitalised patients,’ she explains. ‘But we pressingly need interventions that we can use in the community to treat the infection early, as well as having effective antivirals, which can be used to prevent contacts of infected folks from becoming infected – thereby preventing community spread and enabling us to better cut off community outbreaks.’