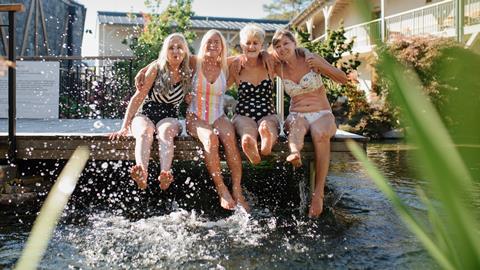 The odour of amity: how you smell can predict friendships

Two strangers with similar body odour are more likely to become friends, a study by scientists in Israel has found. It shows that despite being an underappreciated sense, smell can play an important role in how people form and maintain social bonds.

‘People constantly, but mostly subconsciously, sniff themselves and others,’ says Inbal Ravreby from the Weizmann Institute of Science, who led the study together with Noam Sobel. While other mammals use smell to decide who is friend or foe, ‘the function of this in humans is, to a large extent, unknown’, Ravreby explains.

Now her team has discovered that friends’ body odours are 20% more similar than those of random couples.

They collected body odours of 10 same-sex friend pairs who reported that they had ‘clicked’ – formed an instant connection – when first meeting each other. Similarities were analysed with an electronic nose, a device with 10 different metal-oxide semiconductor sensors sensitive to volatiles such as aromatics, alcohols or sulfur compounds. People rated friends’ body odours as more similar than those of random couples, but the device didn’t allow Ravreby’s team to uncover which scent’s molecules were responsible for this bonding.

The researchers didn’t uncover one single factor – such as place of residence, diet or age – that would explain the odour similarity. In fact, they could predict with 71% accuracy whether strangers would have positive social interactions based on how similar their body odour is. Out of 17 people who were asked to play a non-verbal game, those couples that smelled most similar were more likely to say they had clicked with one another.

However, Ravreby is careful to point out that this doesn’t mean that body odour similarity is the sole cause of the formation of friendships. Bettina Pause, who leads the biological psychology and social psychology research group at the Heinrich Heine University Düsseldorf, Germany, agrees with this. ‘It just means that smell is more important than formerly thought in mediating social perception and social bonds.’

However, rather than subconsciously comparing one’s own and others’ smell when forming friendships, Pause says that there may be a genetic mechanism behind the shared odour. ‘Friends have more similar olfactory receptors genes than expected by chance, [they] smell the world as more alike than non-friends,’ she explains.

Shima Moein from the Smell and Taste Center at the University of Pennsylvania, US, also agrees that it seems likely that odour is one of the contributing factors in forming friendships. ‘But it’s very difficult to isolate odour from all other variables,’ she says. Friendships are mostly formed in the context of a shared activity or experience, so experiments don’t reflect social reality well. ‘It doesn’t happen often that you’re walking in the street without any purpose and go to one person and say “Oh, you’re so good, I want to be friends with you,”’ Moein says.

Olfaction has long been under-researched, says Moein, despite the fact that changes in the sense appear to be one of the earliest symptoms of diseases like Alzheimer’s and Parkinson’s. With Covid, which for many has resulted in a loss of smell, this is changing.

The study, says Ravreby, ‘shows us how much nonverbal cues, which are even subconscious, influence our daily lives. There may be new paths in therapy because you can use these olfactory cues instead of verbal cues.’

‘Our next step is to seek causality and the underlying mechanisms,’ Ravreby adds. Body odour is related to genetics, so from an evolutionary perspective, ‘if people choose [friends] that are similar to them genetically, it may mean that [the friend’s] offspring will be also similar to a degree to [their own] genes’.