This may be the world’s largest (permanent) periodic table ever 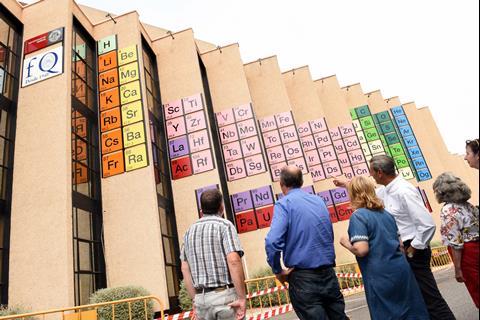 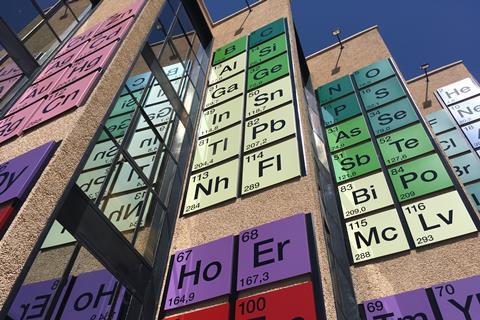 It features all 118 known elements 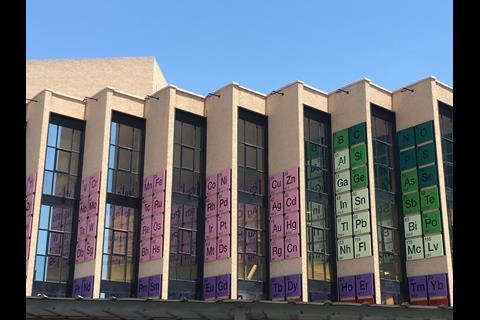 An enormous periodic table has been unveiled on the side of the chemistry faculty building at the University of Murcia in Spain.

The structure covers approximately 150m2 in total, and comprises 118 75×75cm metal squares. They represent all the known elements and are mounted on screens attached to the building. Its designers believe it is the largest mural periodic table in existence.

Pedro Lozano Rodríguez, dean of the faculty of chemistry, says it was the bevelled design of the building’s glass and concrete facade that gave them the idea of building a giant periodic table.

‘We want to send a positive message to society about chemistry, and how much good chemistry has contributed to the wellness of society,’ he tells Chemistry World. ‘[People] must know that everything that surrounds us is formed by the elements contained in this periodic table.’ He adds that the ‘artistic ensemble’ will be completed with the addition of a 50-seat grandstand, which will be used as an open-air classroom for students to view the table as they learn.

The construction of the huge periodic table was sponsored by 12 companies based in the region.

Although the university’s creation is probably the largest ever permanent periodic table, this is not the first time Dmitri Mendeleev’s table has been recreated in giant form. In 2006, an eight-storey high periodic table made of posters was created at the Richard J Daley Center in Chicago, US, to celebrate the city’s first annual Science Expedition. And last year more than 100 schools in San Antonio, Texas, clubbed together to build the world’s largest periodic table by laying 3.5×4.5m tarpaulin ‘elements’ out in a stadium to cover an area of more than 2000m2.

Do you know of any other larger periodic tables out there? Let us know where they are!