‘We could predict thousands of new materials each day using our software and say which ones of those look good,’ says Kim Jelfs. ‘But if they can’t actually be made in the lab, it’s completely meaningless.’ That viewpoint is central to how the Jelfs group functions. They are very much computational chemists, but rather than work in isolation, they actively embed themselves into experimental studies.

Jelfs’ ultimate aim is to help her experimental colleagues find new materials quicker. The group has a key piece of software written in Python called the supramolecular toolkit (stk).1 It was first developed by a talented student, but everyone in the group now adds to it. They also augment other software – particularly open-source software – made by other groups by, for example, coding workflows to make processes automatic for high throughput systems. 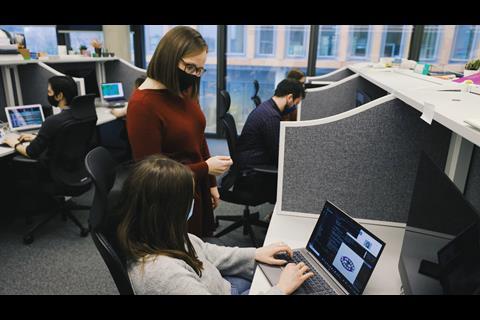 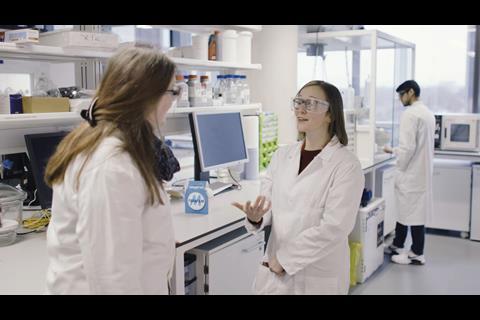 The team first developed their supramolecular toolkit to screen porous molecules. It starts with organic building blocks, or precursors, and assembles them into different topologies. It then looks for the low energy structures, which are the ones that you would expect to observe experimentally, before the next part of the software analyses the materials’ properties.

Porous organic molecules have potential applications as membranes, and in sensing and catalysis. ‘Because porous molecular materials are modular, they have solution-processability benefits,’ explains Jelfs. ‘And computationally, being modular gives us the opportunity to screen them in a completely different way than you would be able to for zeolites and MOFs. You can potentially combine different modules in one material to allow really fine control of their properties.’

The team can also apply their supramolecular toolkit to other systems that have organic building blocks. For example, they’ve recently worked with a collaborator to screen 350,000 different linear polymers for optoelectronic properties. They’ve also extended their software to look for metal–organic cages.2 Being able to adapt their software and processes to new systems is a priority for Jelfs. ‘We’re now getting approached by different experimental groups, asking us to look at other classes of materials, and it’s relatively simple to add that functionality onto our software. What takes a long time is having in depth knowledge as to what are the problems for a particular class of materials, as well as practicalities from our computational side. So how to get a good description and how to pick out the key features of those systems that are relevant for our collaborators.’

One consideration for the team is finding candidate molecules that are realistic synthetic targets. ‘A bottleneck in synthesising porous organic molecules is first you need to synthesise the building blocks,’ explains Jelfs. This motivated the team to devise a machine learning model to predict how easy it is to synthesise precursors for porous molecular materials.3 The risk for experimentalists trying something unconventional and it not working is high. Tools developed in the Jelfs’ lab, however, can give experimentalists the confidence to test out a precursor that they wouldn’t have done otherwise.

Everyone in the Jelfs group has a direct experimental collaborator. ‘I encourage them to have continual conversations rather than talk once and then come back to them six months later. That’s how we make sure we do things that actually help our collaborators.’ In the last few years, experimentalists have been actively approaching Jelfs with their problems. ‘That was when I realised we were getting somewhere,’ she says. ‘It’s not easy. And I’m not saying that we’ve solved this whole problem, but we can make a difference. Getting to know the systems and working with people over a long time helps the difference we make to grow and grow.’

Jelfs first encountered computational chemistry when she did a summer programme at the end of the third year of her undergraduate degree. She notes, however, that undergraduate students these days are gaining computational skills much earlier. At Imperial, undergraduates code in Python from their first term. ‘Every undergraduate student that joins my lab can already code in Python. That’s obviously transformational. And that’s why Imperial is a great place for me to be.’ Last year, Imperial also launched a MSc in Digital Chemistry as part of their institute for Digital Molecular Design and Fabrication (DigiFAB). 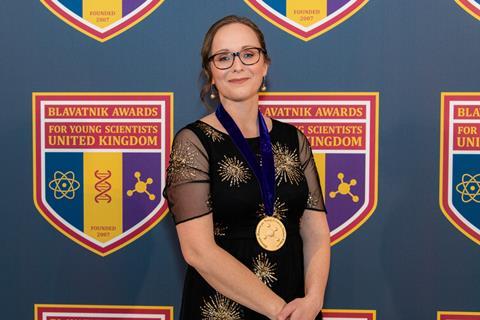 ‘I think people can be disillusioned with promises of what computational chemistry can do. Often that comes down to not understanding the limitations properly,’ Jelfs says. ‘But when [experimental collaborators] have even a little bit of computational knowledge that helps you to work together really well, because they’re not expecting you to be able to do everything.’

Jelfs was recently named the chemistry laureate of the 2022 UK Blavatnik Awards for Young Scientists, which will see her receive £100,000 in unrestricted funds. ‘Considering who has previously won the award, it’s incredible to even be considered anywhere close to them,’ Jelfs says. ‘I’ve had the luck to work with really great people in my group and my collaborators, and I’m really happy that it makes them feel recognised. And to know that what we’re doing is valued by other people.’