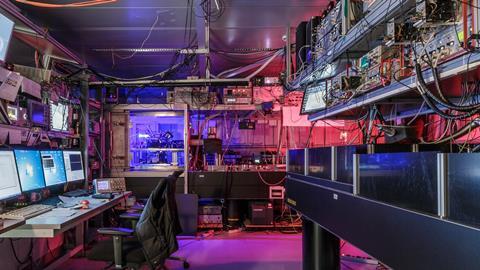 Trapped-ion quantum computer does chemistry calculations for the first time

For an accurate quantum simulation, all you need is a few atoms

A quantum computer that can calculate the energy states of small molecules H2 and lithium hydride using just four trapped ions has been developed by an international team of researchers.

The work ‘is a significant achievement in showing how to use the trapped-ion system for simulating molecular systems’, says Kihwan Kim of Tsinghua University in China, who was not directly involved but is also working on this approach to quantum chemistry.

So far, most of the headlines for breakthroughs in quantum computing have been garnered by devices that use superconducting circuits as their quantum bits (qubits), with the quantum information encoded in the supercurrent wavefunctions. Both IBM and Google, for example, have developed machines with up to 50 qubits and described quantum simulations of molecules such as hydrogen2 and lithium and beryllium hydrides3.

But some researchers think that the best qubits for quantum computing might be made from the quantised energy states of individual ions held in arrays in electromagnetic traps. Information can be read into and out of such ions using laser beams, and can be exchanged between ions via their electrostatic interactions.

The new work has been led by Cornelius Hempel, now at the University of Sydney in Australia but previously a member of Rainer Blatt’s group at the University of Innsbruck in Austria. The researchers have used an array of trapped calcium ions to deduce the ground-state energies of hydrogen and lithium hydride molecules. Their quantum computations agree well with experimental measurements and state-of-the-art classical calculations. 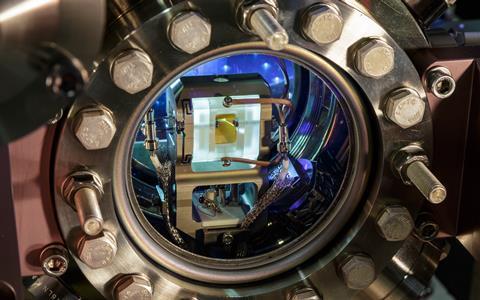 The computations use a system capable of hosting a 20 qubit linear array of individually controllable trapped ions developed at Innsbruck4, although they need only three or four of these qubits for the calculations. Previous efforts to use trapped ions for quantum chemistry have used only a single qubit to simulate the electronic structure of the helium hydride ion5.

The calculation employs a ‘variational’ approach that finds the energy of the molecule represented in the qubits by shuffling its electrons between the molecular orbitals and looking for the configuration of lowest energy. Hempel and colleagues map changes to the electron states in molecular orbitals to laser-driven operations that change the states of the ion qubits.

In principle, the quantum rules that govern the electron interactions, within the potential specified by the positions of atomic nuclei in the molecule, are reproduced exactly by the ion interactions in the array. That’s what makes the quantum simulation so efficient; in a classical computer, those rules have to be approximated in a more cumbersome way.

The researchers then use a second laser to read out the final states of the ions, which fluoresce if they are in a state equivalent to one but remain dark if their state is zero. They perform many runs to find the electron configuration at which the total energy is minimal – the molecular ground state.

Chris Monroe of the University of Maryland, US, who is also developing trapped-ion quantum computation, says that the work shows the great potential of this approach. ‘Right now there are only two technologies appropriate for running circuits with more than three qubits and more than 10 operations: trapped ions and superconducting circuits,’ he says. ‘This work adds to the body of research showing the superiority of trapped ions.’

Hempel says that both trapped ions and superconducting circuits have pros and cons as qubits. ‘In my opinion there is no clear winner at the moment, and most of the noise made in the respective communities focuses on specific advantages while leaving out limiting factors that will come back to bite in real applications.’ For example, ion qubits have the advantage of all being essentially identical, but superconducting qubits can be more easily controlled and manipulated with off-the-shelf electronics.

He says it should be feasible to make such ion arrays of up to 50 qubits using these methods, which would improve the accuracy and make it possible to simulate larger molecules. ‘As soon as we can do 1000 gates on 50 qubits, we can represent molecules like water and ammonia,’ says Monroe.

However, more qubits also means introducing more likelihood of errors, and there’s currently no way to correct for those in quantum computation. To make a single ‘logical qubit’ that can correct errors, says Monroe, will probably require 100 or more physical qubits. ‘Quantum error correction will not play a role in any system until we have thousands of qubits at our disposal, maybe millions,’ he says.