This is what happens when two Leidenfrost droplets collide

Researchers have identified a new phenomenon dubbed triple Leidenfrost effect that explains why two droplets of different liquids bounce off each other when placed on a hot surface instead of merging.

The Leidenfrost effect can be observed when a droplet is placed on a surface much hotter than the liquid’s boiling point. The liquid at the droplet’s base evaporates quickly to form a vapour barrier between the surface and the bulk, decreasing its evaporation rate and surface friction. The effect has been used to speed up reactions, and could be useful for microfluidics applications, but to do so, we need to have a better understanding of how the phenomenon works. 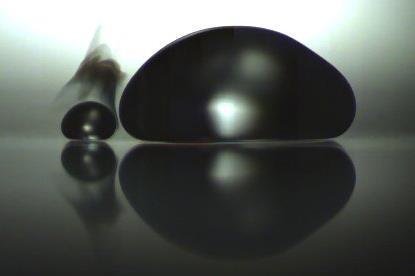 To that end, a team from Mexico and France has been investigating what happens between multiple Leidenfrost droplets by filming their interactions with a high-speed camera. They found that while droplets of the same liquid will coalesce, droplets of different liquids with significantly different boiling temperatures – like water and ethanol – will bounce off each other.

Because of their different boiling points the droplets exist at different temperatures. As a result, the hotter of the two will act as a secondary hot surface to the cooler one, generating a second Leidenfrost state. The team has dubbed this the triple Leidenfrost effect, so called because at the moment of contact there are three Leidenfrost interactions: one between each droplet and the surface, and one between the two droplets.

The triple state persists until the faster-evaporating droplet reaches a size similar to its capillary length, at which point the two liquids will merge. From there, the team identified three possible outcomes: miscible droplets will coalesce and mix; immiscible liquids (like water and toluene) will coalesce and form a multiphasic Leidenfrost drop; and a highly volatile liquid will explode inside a hotter droplet – as seen in the case of chloroform and ethylene glycol.