Chemical reactions can proceed an order of magnitude faster in hot, skittering droplets 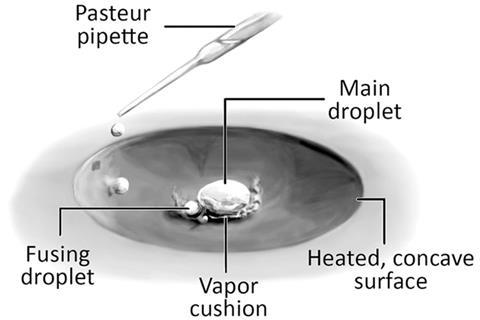 Reactions can be accelerated significantly – in some cases by orders of magnitude – by performing them inside Leidenfrost droplets, researchers in the US have discovered.1 The team hopes that the reactions could provide a means to efficiently synthesise small quantities of compounds in industry.

In 2011, Graham Cooks at Purdue University in Indiana and colleagues showed that chemical reactions could be speeded up significantly in tiny droplets produced by electrospray ionisation.2 Subsequently, other researchers have shown that reaction rates can be accelerated by a factor of more than a million. ‘What we think we know is that it’s an interfacial phenomenon and it’s to do with the partial solvation of especially the charged reagent at the interface,’ explains Cooks. The activation energy for such partially-solvated species is much lower than in a bulk solution, so reactions proceed much more quickly at the boundary of the droplet. However, although these droplets hugely speed up reactions, they contain so little fluid – sometimes less than a femtolitre – it is difficult to synthesise a useful amount of a product.

In the new research, Cooks and colleagues looked at millilitre-scale droplets produced by the Leidenfrost effect, in which fluid dropped onto a hot surface such as a skillet vaporises at the bottom, producing droplets that levitate on a cloud of their own vapour. They performed three common organic reactions inside Leidenfrost droplets: two schemes for producing hydrazones from hydrazines, the Katritzky reaction of 2,4,6-triphenylpyrylium with 4-methoxyaniline to yield the corresponding pyridinium cation and a base catalysed Claisen–Schmidt condensation. ‘We get, typically, an order of magnitude acceleration,’ says Cooks. ‘[In electrospray ionisation produced microdroplets] those same three reactions gave acceleration factors on the order of a thousand. The advantage here is that you very easily synthesise milligram quantities of materials.’ Cooks believes this could be useful in pharmaceutical development, for example, as it could allow easy, quick synthesis of multiple different chemicals for analysis.

‘It’s very interesting because now it shifts from just nanosynthesis and inorganic chemistry that can be carried out in the droplet to also organic chemistry,’ says Mady Elbahri at Christian Albrechts University of Kiel in Germany, who has been studying the synthesis of inorganic nanoparticles inside Leidenfrost droplets since 2007.3 Elbahri, whose group published a detailed study of the physics and chemistry inside Leidenfrost droplets in 2013,4 is unconvinced by the group’s treatment of them as larger analogues of electrospray ionisation droplets, however. ‘In my opinion, there is some similarity,’ he says. But he adds that Leidenfrost droplets have their own characteristics that aren’t comparable to electrospray droplets. He notes, for example, that a Leidenfrost droplet has a hot vapour–liquid interface at the bottom and a cold air–liquid interface at the top. ‘[Cooks] refers here to the interfacial effects in his synthesis,’ he says. ‘I would ask which interface he means!’