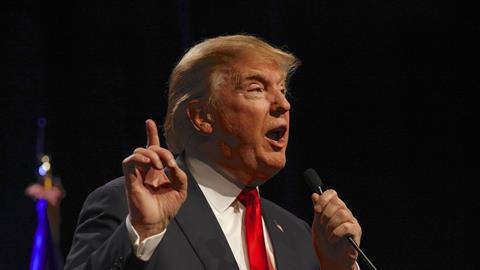 President Trump has announced that the US will withdraw from the Paris climate accord, under which nearly 200 countries committed to reducing greenhouse gas emissions and limiting global temperature rises. The nation’s science community has stood by the international agreement and stressed its importance with the American Chemical Society (ACS) expressing grave concerns following its abandonment.

The Paris accord is very unfair, at the highest level, to the US

‘As of today, the US will cease all implementation of the non-binding Paris accord and the draconian financial and economic burdens the agreement imposes on our country,’ Trump announced yesterday. This means that the US joins Syria and Nicaragua as the only countries not party to the agreement.

The Paris agreement came into force in November 2016, and included a goal of keeping global temperature rises below 2°C above pre-industrial levels. In announcing the US’s exit from the deal Trump said that compliance with its ‘onerous energy restrictions’ could cost the country 2.7 million jobs by 2025, including 440,000 fewer manufacturing jobs. ‘The Paris accord is very unfair, at the highest level, to the US,’ he stated, arguing that it effectively blocks the development of clean coal in the US. ‘This agreement is less about the climate and more about other countries gaining a financial advantage over the US.’ Trump said the US will either begin negotiations to re-enter the Paris accord under terms deemed more fair, or start crafting an entirely new deal.

For its part, the Society of Chemical Manufacturers and Affiliates responded to Trump’s announcement with a statement asserting that chemical manufacturers ‘will continue to meet global demand for materials and technologies that improve energy efficiency and reduce emissions’.

Meanwhile, the ACS said it was ‘disappointed’ by the president’s action and asked that this and future administrations reconsider the decision. ‘The agreement, signed by 197 countries in 2015 and ratified by 147, is needed to reduce emissions of greenhouse gases and mitigate and adapt to climate change,’ the organisation stated.

‘Climate change represents a real and current threat to our economy, health and welfare,’ warned ACS’s executive director and chief executive, Thomas Connelly. ‘America should continue to take the lead in addressing global greenhouse gas emissions and become a leader in sustainable energy production and technology.’ The ACS noted that international cooperation is crucial to addressing climate change, vowing to work with colleagues in the scientific, industry and policy fields to improve global sustainability.

The chief executive of the American Association for the Advancement of Science, physicist and former congressman Rush Holt, suggested that Trump’s action could ‘abdicate our leadership role in a critical science policy issue and put current and future generations at great risk’.

Ioannis Ioannou, an associate professor of strategy and entrepreneurship at the London Business School, also criticises the White House action as ‘an epic mistake’. He says it will harm US business and economic competitiveness. ‘We can expect economic countermeasures from other countries,’ Ioannou tells Chemistry World.

Further, Ioannou suggests that American companies with strong commitments to sustainability may reconsider having their headquarters in the US. He also says some industry players may be relying on government grants to produce greener or more sustainable products, and those grants could be cut or significantly reduced.

‘It might slow down innovation and impede access to international markets if these cleaner companies have to compete using standards not accepted in the rest of the world,’ Ioannou states. ‘Although this withdrawal might meet campaign promises, it is harmful to the economy and job creation in the US – it will translate into lower standards when it comes to toxic materials, as well as air and water pollution.’

Observers note that some progressive industry players like Dow Chemical have made significant progress towards sustainability and self-regulation to make their industry cleaner, and they suggest that those companies will not want to go backwards. ‘There is definitely a case to be made that these companies can commit to those [Paris agreement] targets and reach those targets so that they can compete in the international market,’ Ioannou states.

At the same time, the governors of California, New York and Washington reacted to Trump’s announcement by immediately forming the United States Climate Alliance, a coalition that will convene states committed to upholding the Paris accord and taking aggressive action on climate change. Those three states together represent over one-fifth of US gross domestic product.