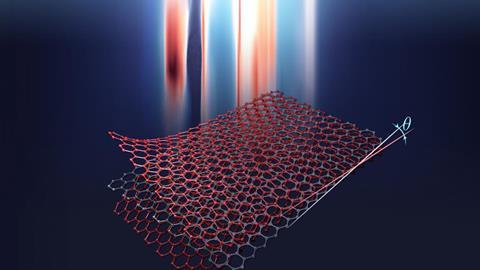 Graphene famously conducts electrons as though they were massless particles like photons, which means that their speed does not depend on their energy. However, just as the speed of light varies in different materials, the speed of electrons in graphene can be controlled. It was predicted to hit zero in bilayer graphene with a ‘magic angle’ twist of 1.1° between the layers, allowing electron–electron interactions to dictate the structure’s properties. In 2018, Pablo Jarillo-Herrero and colleagues at the Massachusetts Institute of Technology confirmed this, showing that feeding electrons into twisted bilayer graphene at cryogenic temperatures could produce a novel superconductor. Subsequently, says Jarillo-Herrero, various groups – including his own – have tested other twisted systems. ‘They have found interesting correlated [electron] materials and correlated behaviour, but none of them was a robust superconductor.’

A 2019 prediction from theoretical physicist Ashvin Vishwanath of Harvard University, US, and colleagues suggested that multilayer graphene with alternating relative twist angles would also become superconducting, with each additional layer increasing the magic angle. This prediction has now been confirmed independently for trilayer graphene with the central layer twisted relative to the parallel top and bottom layers: first by Jarillo-Herrero’s team, and secondly by a Harvard group comprising Vishwanath and experimentalists led by Philip Kim. 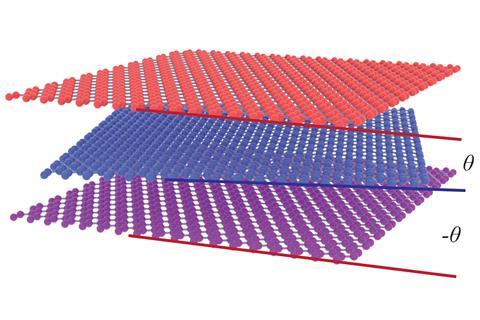 At the predicted twist of around 1.55°, the material became a superconductor that – when its low charge density was taken into account – had the strongest electron pairing ever seen. ‘With the density of electrons you have in the cuprates, if you had the relative coupling strength you have in these trilayers, you would have superconductivity well above room temperature,’ says Jarillo-Herrero. ‘This material gives you much more bang for your buck.’

Kim’s group also measured the twist between the bottom and middle layers and the middle and top layers in the constituent bilayers. They found that, owing to unavoidable experimental imperfections, they were 1.69° and 1.35° respectively. Nevertheless, the trilayer structure behaved as though it had an average twist angle of around 1.55°. ‘That implies that either the effect of the slight mismatch can average out or that, when you make the trilayer, the stacks readjust somehow,’ explains Kim.

The trilayer’s superconductivity could be tuned more widely than in bilayer graphene, depending not just on the total potential of the material, but on the potential difference between the layers. This tunability allowed them to explore its superconductivity in more detail than possible with any previous superconductor. Most notably, they found that, at points in the material’s phase diagram where the classical theory of superconductors (in which electrons are coupled by lattice vibrations) suggests that superconductivity should be most robust, it actually vanished. ‘In most materials, you don’t have the level of control that we have in this trilayer system,’ says Jarillo-Herrero, ‘I don’t recall any experiment that saw that.’

Kim’s group found the same inconsistency with conventional superconductor theory. Instead, the researchers say, it supports an exotic theory of superconductivity in multilayer graphene postulated by Vishwanath’s group and University of California, Berkeley colleagues. The traditional theory also fails in high-temperature superconductors such as cuprates and pnictides, and Kim says that, although the mechanism is probably different, ‘having a mechanism of how superconductivity arises from a strongly-correlated, emergent electronic mechanism is a very good thing that we can hope will help us to understand other systems’.

David Goldhaber-Gordon of Stanford University in California is impressed with the findings. ‘It required a heroic effort to make and measure multiple samples of such sophistication, and the results from Kim and Jarillo-Herrero are qualitatively similar,’ he says. He cautions, however, that ‘the fact that these papers are close to the pinnacle of care and consistency that we can get is telling us that we have a problem… In each case, the researchers took an atomic monolayer, picked it up, then picked up another one, and yet another, with precise relative twists. It’s amazing that you can do that and get electronic properties at all consistent across multiple samples. You’d like to have a synthesis protocol more systematic than that.’ Several researchers are working to tackle this issue, he adds.