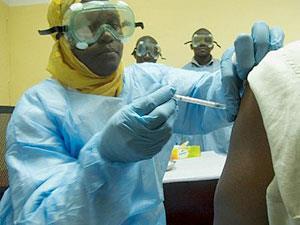 The US Department of Health and Human Services (HHS) is fast-tracking tests on an Ebola vaccine by providing $5.8 million (£3.6 million) under a one-year contract with the Maryland-based biotech company Profectus BioSciences. HHS will also offer subject matter expertise and technical assistance.

Under the agreement, the vaccine developed by Profectus BioSciences will be tested in animals and humans, HHS has announced. The contract can be extended to a total of 13 months and $8.6 million.

‘We are pushing hard to advance the development of multiple products as quickly as possible for clinical evaluation and future use in preventing or treating this deadly disease,’ said Robin Robinson, the director of HHS’s Biomedical Advanced Research and Development Authority, which is providing the funding.

Animal studies supported by the National Institutes of Health (NIH) and the Department of Defense showed that a single dose of the experimental Ebola vaccine provided complete protection in non-human primates. HHS said it will support further development of the vaccine against the Ebola virus strain responsible for the current epidemic.

Other significant Ebola vaccine clinical trial activity underway includes Phase 1 clinical trials of an investigational Ebola vaccine developed by GlaxoSmithKline (GSK). The candidate vaccine is against the Zaire species of Ebola, which is behind the current epidemic. It uses a single Ebola virus protein to generate an immune response.

In the wake of the continuing Ebola crisis, GSK said that the development of the vaccine candidate is progressing at an ‘unprecedented rate’, with Phase 1 trials underway in the US, UK and Mali, and additional trials starting in the coming weeks.

GSK expects that the initial data from the Phase 1 safety trials will be available by the end of the year and, if successful, the next phases of the clinical trial programme will begin in early 2015. These will involve the vaccination of thousands of frontline healthcare workers in Sierra Leone, Guinea and Liberia – the countries hardest hit by the epidemic.

Meanwhile, another experimental Ebola vaccine candidate developed by the Public Health Agency of Canada and licensed to US-based NewLink Genetics is also expected to enter Phase 2 trials in 2015. That vaccine is directed at the outer protein coat of the Ebola virus and has been shown to stimulate the production of antibodies that attack the virus.

The director of the NIH, Francis Collins, stirred up controversy earlier this month when he suggested in an interview with The Huffington Post that government spending cuts delayed the development of an effective Ebola vaccine.

The National Institute of Allergy and Infectious Diseases (NIAID) issued a statement clarifying that the loss of NIH purchasing power over the last 10 years, particularly with the across-the-board sequestration cuts that took effect in March 2013, has slowed down biomedical research in virtually all areas. ‘NIH-funded Ebola research would be further along if that had not happened,’ the institute stated.

NIH researchers had found it difficult to identify an industrial partner until recently, and that is critical for scale up of vaccine production, according to NIAID. In addition, the institute noted that the extremely limited market potential that existed prior to the 2014 outbreak meant that there had been little industrial interest in an Ebola vaccine.