US researchers design a polymer that can dissolve after use, either remotely or automatically

Researchers from the Georgia Institute of Technology in Atlanta, have developed a polymer–additive system that can vanish in an instant by triggering its own depolymerisation. The work was presented at the American Chemical Society’s national meeting in San Diego, California on 26 August. 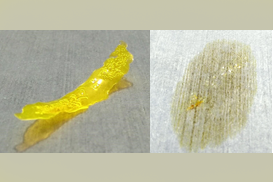 After being exposed to sunlight for 10 minutes, the solid polymer (left) decomposes and disappears (right)

The team, led by Paul Kohl, based its disappearing design on cyclic polyaldehydes, such as phthalaldehyde. Breaking just one of the thousands of links that make up these ring-shaped polymers will cause instant collapse into its constituent monomers, he explains. ‘It instantly depolymerises with one attack.’

The researchers then developed additives that can deliver the self-destruct prompt. The trigger is a photocatalyst that responds to UV or visible wavelengths of light and initiates the bond-breaking attack that leads to rapid depolymerisation of the whole material.

The team has successfully demonstrated that this depolymerisation can be triggered remotely by lighting up a tiny LED in a device made from the polymer. ‘The LED is so thin that it just crumbles when the substrate it is on disappears,’ Kohl said. A thermal spike to 80°C can also prompt the disintegration process. ‘If you have a battery and a little heater, you just give it an instant at a warm temperature and it disappears,’ Kohl says.

The depolymerisation and evaporation process can take anywhere from under a minute to a couple of hours, depending on the technique used and the time of day the device is triggered. The group has also figured out how to put this self-destruction on a time delay so that is not triggered for a specific number of hours.

Gone when the morning comes

The material has been used to create small sensors comprised of a printed circuit board made out of polyphthalaldehyde with silver or copper nanoparticles as the conducting connections. On exposure to light, the polymer binder disintegrates and the circuit board disappears. The team has also used the material to demonstrate a parachute that could transport cargo for a hundred miles or even more before it is delivered and disintegrates.

Larger devices have also been trialled. Last year, a 4.5kg glider with a 1.8m wing span was deployed from a helium balloon at night, flew about 50 miles and landed within two feet of its target, Kohl recounted. ‘The sun came up, and it disappeared,’ he says.

As well as its obvious military applications, the material has numerous civilian uses, says Kohl. For example, temporary protective films or adhesives on consumer products, or environmental sensors to monitor the soil content in a large field. ‘You could scatter small sensors around, collect the data … then trigger their disappearance,’ Kohl suggests. ‘They would disappear into relatively natural, non-toxic things.’

Kohl notes that concerns about exposure to these aldehydes and plasticisers before or after they break down must be considered. ‘There is nothing in [the material] which is overly dangerous, however everything is a chemical and you should read the [Material Safety Data Sheet],’ he said. ‘You have to handle it with care, it is not as inert as a typical plastic, so we would be careful not to have a lot of contact with “civilians” let’s say.’