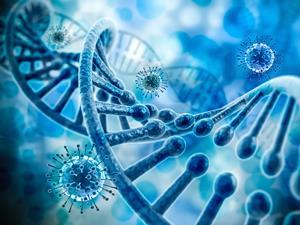 Viral DNA is solid and glass-like when the virus is inactive, but melts as conditions become more favourable for infection

US Researchers have identified the factors that enable viral DNA to turn from solid to liquid, which allows them to infect host cells. They say the process could become a target for new antiviral therapies.

The DNA inside a virus’s protein shell is packed much more densely than in the nucleus of a human cell. Recent research has shown that due to the tight packing and the mutual repulsion of the negative charges on the DNA’s phosphate groups, the chain can hardly move. Earlier this year, Douglas Smith and colleagues at the University of California at San Diego analysed the mechanisms of the packing process driven by a motor protein and demonstrated that the packaged DNA of an inactive virus exhibits non-equilibrium or ‘glassy’ dynamics.1

Yet during infection, viruses can inject their DNA like a liquid into the host cell at high speed. So how can the pressurised, frozen DNA suddenly become liquid enough for this to happen? A group led by Alex Evilevitch at Carnegie Mellon University has worked out the mechanism for this process in two unrelated types of virus. For the bacteriophage lambda, which infects Escherichia coli bacteria in the human gut, the researchers studied the compressibility of the DNA using atomic force microscopy, and the energy released upon injection as a function of temperature. They found that the tightly-packed DNA melts and becomes sufficiently mobile for injection as the temperature approaches human body temperature, around 37°C.2

‘The evidence for a structural transition is very striking,’ comments Smith, who led the earlier work on viral DNA packaging. ‘The effect on ejection is not strict because lambda phage viruses do infect bacteria grown in a Petri dish at lower temperatures. Temperature also has complex effects on the metabolism of the host cells from which viruses draw their resources. However, the present studies reveal a clear and interesting effect of temperature on the physical properties of densely packed DNA.’

In a separate study on Herpes simplex virus type 1, which can reside in human cells for long periods and injects its DNA into the nucleus when it awakens, the Evilevitch group found that the ionic conditions in the cytoplasm of the host cell, as well as temperature, are key factors that determine when the DNA is liquefied in preparation for injection.3

In both cases, maintaining the DNA in a solid, glass-like state while conditions are not right for infection stabilises the virus particle and ensures that its DNA isn’t ejected at the wrong time. The team say understanding this regulatory mechanism may help researchers to come up with novel antiviral therapies that could block the phase transition, and thus prevent infection.