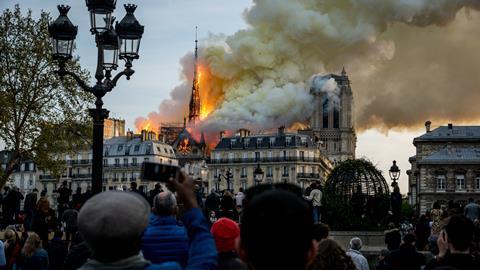 Warnings on lead in dust released during Notre Dame fire

Police in Paris have warned people living near Notre Dame Cathedral about possible lead contamination in the aftermath of the fire that destroyed the landmark’s roof and spire two weeks ago.

Hundreds of tonnes of lead from the building’s structure are thought to have melted during the blaze, and police say particles of the metal may be present in the resulting dust and debris deposited on nearby surfaces. Elevated levels of lead have been detected in areas close to the cathedral, and investigators say nearby public spaces will remain cordoned off until lead levels have returned to normal. They added that the effect is ‘very localised’ and likely only to affect open areas where dust was able to settle during the fire. ‘With regard to homes or private premises, it is recommended that residents in the immediate vicinity of the Notre Dame proceed to clean their home or premises and their furniture and other items, using wet wipes to eliminate any dust,’ the police said in a statement to the Agence France-Presse news agency.

They added that the risk of lead poisoning is low, as this usually results from years of exposure. There have been no reported cases of acute lead poisoning since the fire.