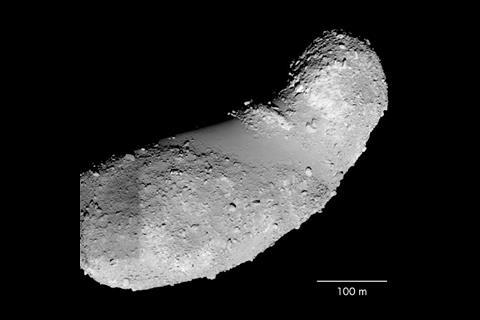 Asteroid Itokawa is the much-battered remnant of a larger parent body. Working with samples provided by the Japan Aerospace Exploration Agency, ASU scientists have discovered that despite Itokawa's tumultuous history, this rubble-pile asteroid still contains significant amounts of water in its minerals. The samples studied by Jin and Bose came from the feature called the Muses Sea, which is the smooth area in the middle of Itokawa. 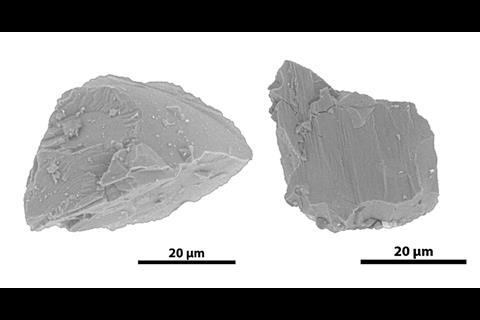 The two Itokawa particles studied by Jin and Bose are tiny: for comparison, a human hair is 100 to 500 microns in diameter. ASU's NanoSIMS instrument made it possible to extract information on the particles' water content.

For the first time water has been detected in mineral samples from the surface an asteroid. Researchers at Arizona State University in the US examined tiny grains from the surface of the peanut-shaped asteroid Itokawa, which were collected during the Japanese space agency Jaxa’s Hayabusa mission and returned to Earth in 2010.

Cosmochemists Ziliang Jin and Maitrayee Bose were given access to five specks of dust less than 10µm in diameter, which they analysed using a nanoscale secondary ion mass spectrometer, an instrument capable of measuring tiny quantities of material with great sensitivity. They were able to detect water in particles of the silicate mineral pyroxene, despite the asteroid having being subjected to high temperatures and collision events.

Itokawa is one of a class of asteroids called silaceous – or S-type – asteroids, which are abundant in the asteroid belt. The researchers say their findings suggest these supposedly ‘dry’ asteroids may contain more water than is currently assumed, and they calculated that as much as half the water in Earth’s oceans could have been delivered to the early planet by meteorite impacts. They are hopeful that future sample return missions, such as Nasa’s Osiris–Rex spacecraft that is due to start collecting samples from the asteroid Bennu next year – will offer more clues to the origin of Earth’s water.