Crystals reveal the site of the world’s oldest meteorite strike 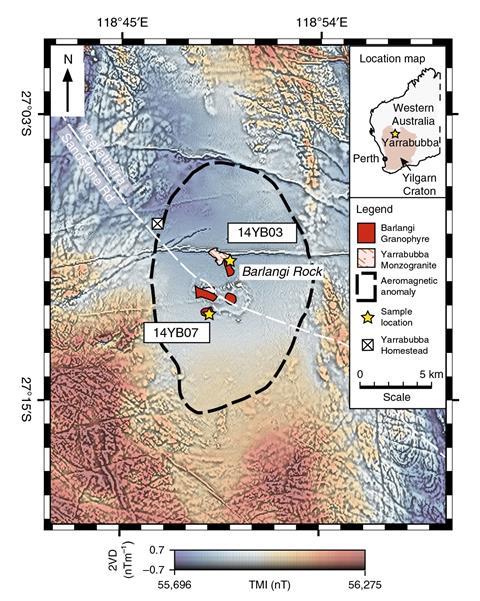 Map of the Yarrabubba impact site, which is no longer visible from the ground as a result of erosion and other geological and biological processes

Chemical analysis of ancient crystals has revealed a meteorite strike in Australia 2.229 billion years ago is the oldest impact yet discovered.1

The meteorite hit when our planet was covered in ice, and researchers think a cloud of water vapour it threw into the atmosphere could have acted as a greenhouse gas to warm the entire planet.

The researchers studied crystals they sampled in 2014 at the Yarrabubba impact site in Western Australia, about 620km north-east of Perth.

The impact is thought to have been caused by a roughly 7km meteorite smashing into the Earth, but its heavily-eroded 70km crater is now only visible as a central anomaly in geophysical surveys, and almost nothing can be seen on the surface. ‘You are right in the Australian bush, it is kind of what you imagine – kangaroos and emus running past, a very flat, desert-like landscape,’ says study co-author Chris Kirkland, a geochronologist at Curtin University in Perth.

Kirkland and his colleagues imaged tiny grains of zircon and monazite, smaller than the width of a human hair, to see where their crystal structures were deformed by the meteorite impact. ‘The individual grains are actually quite beautiful,’ he says. ‘They’ve got a range of textures that can only be produced under extreme temperature and pressure conditions – and the only way to get those extreme temperatures and pressures on Earth is to slam a large rock into another large rock.’

Zircon and monazite contain traces of uranium, so the researchers used a narrow beam of oxygen ions to measure radioactive decay products in the parts of the grains deformed by the meteorite impact. ‘By targeting the specific domains within the crystals that were reset by the impact event, we were able to get the age of the impact,’ explains lead author Timmons Erickson, a geochronologist at Nasa’s Johnson Space Center at Houston in the United States.

The impact 2.229 billion years ago is 200 million years older than the Vredefort Dome in South Africa, the next oldest-known meteorite crater.

It coincides with the end of a period of intense glaciation – a so-called ‘snowball Earth’ state – and raises the possibility that the Yarrabubba meteorite was the reason it ended. The impact could have melted an ancient layer of ice and released up to 5 trillion tonnes of water into the atmosphere – eventually tipping the chemistry of the earth’s atmosphere so it could sustain the warm conditions of today, Erickson says.

Kenneth Amor, a geochemist at the University of Oxford, says the dating of the impact by Erickson and colleagues looks believable. Amor was not involved in the research, but he recently led a team that discovered the largest meteorite to hit Britain – a 1.2 billion year-old impact in Scotland.

The idea that a cloud of water vapour from Yarrabubba warmed the Earth ‘is an interesting one,’ he says. But ‘if the effects only lasted a few years it would be unlikely to result in a glacial thaw, unless that thaw was already underway’.

While the study led by Erickson has identified the oldest-known meteorite impact, another study has found the world’s oldest substance inside a meteorite that fell in 1969.2 By measuring neon isotopes created by exposure to cosmic rays, the researchers determined some silicon carbide grains in Australia’s Murchison meteorite formed up to 7.5 billion years ago – long before our sun and planets.

The international team thinks that the grains were part of the interstellar dust that coalesced to form our solar system about 5 billion years ago.