Dwarf planet Ceres turns out to be extra-carbony

Asteroid belt’s largest object, thought to be a piece of rock, contains up to 20% carbon 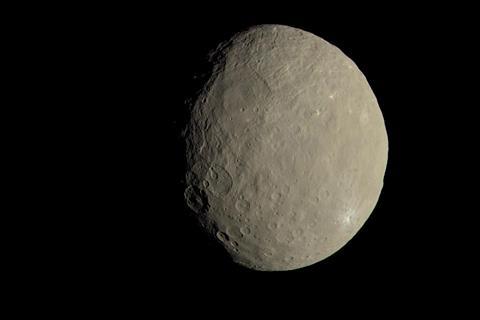 Dwarf planet Ceres is made up of 20% carbon, scientists have concluded after reviewing seemingly conflicting data from Nasa’s Dawn spacecraft. The discovery suggests that the tiny planet – previously thought to be a hunk of rock and ice – might have had a role in distributing organic molecules across the early solar system.

At roughly one-fourth the moon’s size, Ceres is the biggest object in the asteroid belt between the orbits of Mars and Jupiter. In early 2017 astronomers discovered organic material in a Ceres crater. The material included heat-sensitive compounds, suggesting it was formed on the dwarf planet rather than being introduced by a meteor impact.

Now, a team around Simone Marchi from Southwest Research Institute, US, found that even more organic chemistry happened on Ceres as up to 20% of its weight is carbon. Having five times as much carbon as carbon-rich meteorites makes it likely that the compounds stem from aqueous reactions in the protoplanet’s past. However, Ceres could also have accumulated the material from external sources.

The discovery came as the team reviewed an apparent discrepancy between element distribution and reflectiveness data recorded by the Dawn spacecraft. Equipped with a camera, a visible and infrared spectrometer, and a gamma ray and neutron detector, Dawn had been circling Ceres since early 2015 until it ran out of fuel in early November.

Ceres’s low albedo – a measure of how much solar radiation a surface reflects – indicated presence of a darkening material, assumed to be iron ore. But elemental data from gamma ray and neutron measurements failed to show large amounts of iron. Marchi’s team concluded that the dark material must instead be carbon, concentrated near Ceres’ surface.

‘With these findings, Ceres has gained a pivotal role in assessing the origin, evolution and distribution of organic species across the inner solar system,’ Marchi said. ‘One has to wonder about how this world may have driven organic chemistry pathways, and how these processes may have affected the make-up of larger planets like the Earth.’