Scientists in China have turned wood into a transparent material that could be used as a replacement for glass in energy efficient buildings.

Windows are a key factor in making buildings more energy efficient, by helping to control heat and light levels. For instance, windows that transmit visible light but block infra-red light could reduce the need for air conditioning in buildings. ‘Lighting and air conditioning account for 30-40% of the total energy used in buildings, most of which is exchanged via windows,’ says Yanfeng Gao, one of the authors of the research and a professor at Shanghai University. 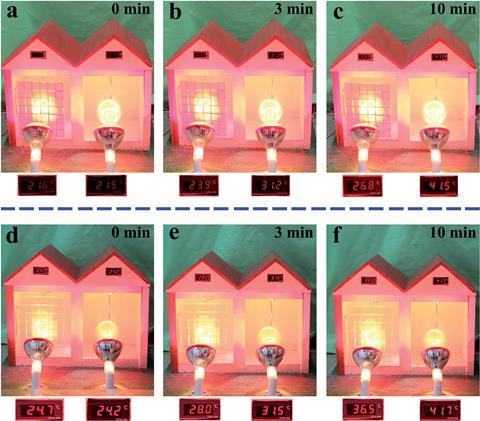 A model house with transparent wood windows (left hand house) had a cooler interior than one with glass windows. The cooling effect is improved by adding caesium tungsten oxide nanoparticles (top row)

Coatings have been developed to make glass windows more energy efficient, but glass is also heavy, fragile and expensive to transport. Although it may not seem an obvious choice, wood could provide an environmentally-friendly solution to these shortcomings, due to its light weight, ready availability, low cost and recyclability.

Of course, wood’s major drawback is that it is not transparent. However, researchers have previously solved this problem by stripping out the light-absorbing lignin from wood and filling the space with a transparent resin, such as poly methyl methacrylate (PMMA). To make the windows in this study better at blocking infra-red light, Gao and his team have now added CsxWO3 nanoparticles to PMMA. The nanoparticles are dispersed in the resin at concentrations that absorb near infra-red light, while maintaining a high optical transparency. The PMMA also protects the nanoparticles against weathering.

When tested in a model house system simulating a real life environment, a house with the wooden windows showed a temperature increase from 21°C to 26°C in 10 minutes, compared to a larger increase of 21°C to 41.5°C in a house with a normal glass window.

‘This is an innovative idea,’ says Claes-Göran Granqvist at Uppsala University in Sweden. ‘Transparency and near-infrared blocking are important features in windows that should not let in excessive solar energy.’

However, Granqvist cautions that windows should not only transmit visible light and provide thermal insulation, but also allow someone to see what is on the other side of a window, which may be difficult with a hazy material such as wood.

Using bio-based materials for smart window applications has many advantages, argues Gao. ‘The advantages of our transparent wood include high strength and shock resistance performance, low thermal conductivity, and low-cost manufacture and transportation,’ he says. He believes the material can also be used on roofs and as covers for solar cells or LEDs.