A hydrogel that can put human stem cells and embryos into stasis, where they are alive but not actively developing, has been created by researchers in the UK.1 The gel – which is made up of temperature-responsive polymer ‘worms’ – offers new insights into how some animals can delay the development of embryos, and could provide an easier, less expensive way to store stem cells used in medicine. 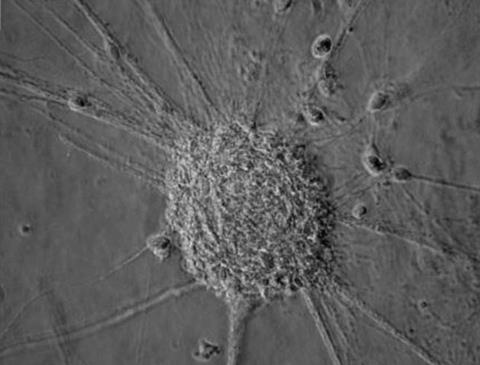 After two weeks in stasis-inducing gel, these neural cells were recovered and are developing normally

Currently, for stem cells to remain pluripotent – able to develop into any kind of cell – they have to either be kept proliferating, which is impractical during transport, or frozen in liquid nitrogen, which is expensive and sometimes damages the cells.

Steven Armes and colleagues at the University of Sheffield, UK, have developed a hydrogel storage medium that can get around this problem by ‘putting cells to sleep’ for up to two weeks, after which they can be recovered and allowed to continue developing. ‘Two weeks is pretty significant … stem cells can be kept alive more or less indefinitely provided you keep proliferating them, but that’s quite labour-intensive,’ says Armes. ‘The stasis trick is a nice way to preserve them with essentially no maintenance.’

The medium is a ‘worm gel’ that Armes’ group developed in 2012. It is made up of long, thin, wormlike micelles of a PGMA-PHPMA diblock copolymer.2 ‘The worms form spheres when they cool down, and that means that the gel breaks up,’ explains Armes. ‘And it re-gels on warming up, the spheres all fuse end-to-end and the worms re-form.’

At first they noticed that human stem cells that were stored in a worm gel did not appear to be multiplying, as they did when placed in another commercially available biocompatible gel. Instead, they found that the cells had entered a phase of arrested development, indicated by the presence of a specific nuclear envelope protein statin associated with cell stasis. Stem cells can remain stored in the gel like this for several days without impacting too much on their viability, and are easy to recover. ‘You simply cool the gel to de-gel it and then you can either fish them out by hand, or you can centrifuge them very gently,’ says Armes.

‘The ability to keep cells alive but dormant using a fully defined and simple polymer may be important for cell storage,’ comments Rein Ulijn from the City University of New York, US, who was not involved in the study. ‘Developing biomaterials that are fully synthetic and simple in structure is of interest in its own right as we are in a better position to change properties systematically and learn about physical, chemical and mechanical effects on cell fate,’ he adds.

After seeing the effect in stem cells, Armes and embryologist colleague Harry Moore were curious about whether the gel would have a similar effect on embryos. In nature, embryos can undergo a stasis period called diapause – animals such as kangaroos are known to be able to suspend the development of early embryos for up to 18 months, although this doesn’t occur in humans.

Armes and colleagues found that when six-day-old human embryos were placed in their gel they stopped developing and appeared to enter diapause. ‘If you take human embryos and put them into other gels, they simply fall apart … they’re in an alien environment so they self-destruct,’ says Armes. ‘If you put them into our worm gels they don’t fragment, and at the end of the second week [of development] if you stop the experiment and do the protein assay for stasis you get a positive result.’ Because of ethics laws the embryos are not allowed to be kept for longer than 14 days, but for that entire time the gel was able to keep the embryos in stasis.

As well as offering a potential option for embryo and stem cell storage, the team’s findings could shed some light on some of the mechanisms controlling embryo development.

When embryos enter diapause in nature, they are encapsulated in a layer of soft, gel-like proteins called mucins. ‘If you look at the structure of [mucins] they’re really rather similar to the worm gels we’re making – they’re long and anisotropic and the coating is very hydroxyl-rich just like our worms. The softness of our worm gels is almost exactly that of mucins,’ says Armes.

The team think the worm gels are mimicking the role of natural mucins, which suggests the structure of the supporting medium could be important for embryonic development. ‘Generally speaking, people think it’s got to be some sort of really complex biochemical pathway to shut down this development,’ says Armes. But it is possible that physical encapsulation within the right medium may be enough. He says that more work needs to be done to establish whether this is the case.

Ulijn points out that the group’s work offers many opportunities for further research. ‘Materials like these may provide a very suitable blank canvas for systematic study of factors that influence cell behaviour – for example, biochemical signals could be systematically introduced at defined concentrations,’ he says. ‘The fact that these materials are of low cost and can be easily scaled is a real bonus.’