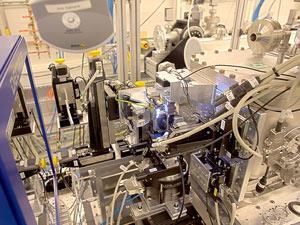 By uniting the world’s brightest synchrotron x-ray source with photography processes dating from the 19th century, scientists have tracked photochemically-driven crystal movements in greater detail than ever before.

Researchers working at the PETRA III synchrotron in Hamburg have witnessed changes in single silver bromide crystal grains in Kodak linagraph paper happening within five-millisecond timescales. That led to a discovery, which Jianwei Miao from University of California, Los Angeles in the US calls ‘completely accidental’, of grain rotations and lattice deformations never seen during chemical reactions before. This underlines the power of their nanodiffraction technique, Miao says. ‘As advanced synchrotron light sources are currently under rapid development we anticipate that in-situ x-ray nanodiffraction can be broadly applied to materials science, nanoscience, physics, and chemistry,’ he stresses.

The reaction between x-rays and silver bromide that triggers silver metal formation helped Wilhelm Röntgen first discover this form of radiation, and from then on enabled medical x-rays. Miao’s team hadn’t planned to study it, but were forced to by what they saw while commissioning their system.

‘We placed a piece of Kodak linagraph paper in front of our detector to locate an x-ray beam,’ Miao explains. Team member Matthias Bartels had been supposed to turn off their state-of-the-art PILATUS x-ray detector during this step, but forgot. The resulting diffraction pattern changed far quicker than they expected. ‘Compared to other types of grain rotation and lattice deformation previously reported the newer types are significantly faster and larger,’ Miao underlines. He adds that his team is now using x-ray nanodiffraction to probe other systems – ones that they had previously intended to.

Margaret Murnane from the University of Colorado, Boulder, US, who has previously worked with Miao but wasn’t involved in this study, is enthused by the possibilities it demonstrates. ‘This work highlights the ability of ultrafast x-ray bursts to uncover how materials function, giving a unique view into the nanoscale world,’ she says. ‘I look forward to many new discoveries in this exciting field.’