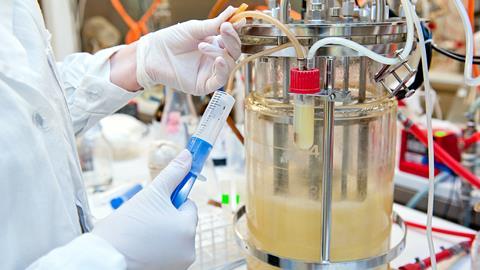 Yeast have been genetically engineered to produce precursors of a chemotherapy drug that’s usually derived from plants. The team then coupled the precursors using established semisynthesis methods to make vinblastine. The work shows how such microbial cell factories could boost the supply of vinblastine and thousands of other natural products, as well as produce a potentially infinite array of pharmaceutically promising analogues that don’t exist in nature.

Vinblastine was first isolated in 1958 from the Madagascar periwinkle, Catharanthus roseus. The monoterpene indole alkaloid (MIA) is widely used as a treatment for several types of cancer by blocking fast-growing cells. It is on the World Health Organisation’s essential medicines list and, in 2020, the US Food and Drug Administration listed it as a drug in short supply.

Vinblastine is usually made by extracting and purifying two precursors, catharanthine and vindoline, from the periwinkle because vinblastine itself is only produced in small amounts in the plant in response to stress. Semisynthesis is therefore required to chemically couple these precursors to form vinblastine. However, the entire process is expensive – supplies are dependent on periwinkle crops with 500kg of dried periwinkle needed to produce just 1g of vinblastine.

Although multi-step synthetic chemistry methods have been explored, the complex stereochemistry of MIAs means such approaches are unlikely to ever produce industrial-scale quantities. However, in 2019, the biochemical pathway that makes vinblastine in Catharanthus roseus was unravelled – one of the longest MIA pathways at 31 steps. This opened up the possibility, albeit challenging with so many steps, of using synthetic biology to make the compound.

Now, an international team has done just that by tweaking the genetic machinery of baker’s yeast to mimic the vinblastine biochemical pathway. Although all 31 steps of the pathway were not achieved, the researchers were just one step short, coaxing the yeast to produce the two precursors, catharanthine and vindoline. These were then photochemically coupled in vitro to make vinblastine.

Achieving this was ‘very emotional’ says Michael Jensen at the Technical University of Denmark whose lab led the work along with Jay Keasling’s group at the University of California, Berkeley, US. ‘When we observed we could make both intermediates in one cell, we knew that we in theory should have enough products to do the coupling.’

To make the ‘microbial cell factory’, the team performed a total of 56 genetic edits in the genome of baker’s yeast, including expression of 34 genes originating from plants, as well as deletions, knock-downs and over-expression of 10 yeast genes.

In C. roseus’s biosynthetic pathway, the necessary enzymes are spread out in at least five different cell compartments, requiring a complex shuttling of compounds between different tissues and cell types. In order to achieve this in yeast the team compartmentalised the 30 step pathway into three distinct modules, each producing a specific intermediate along the pathway. The team then optimised each module in separate strains of yeast, ultimately combining them all in a single strain.

The engineered yeast was fed with glucose, the amino acid tryptophan, and galactose. After 11 days of fermentation, the yeast yielded 91.4μg/litre of catharanthine and 13.2μg/litre of vindoline.

Jensen explains that the final step to vinblastine could not be taken because the peroxidase enzyme thought to be responsible could not be identified, despite screening for multiple candidates. ‘The missing peroxidase was a disappointment, yet there is so much dispute as to whether this step is enzymatically catalysed,’ Jensen says. ‘Adopting chemical coupling did not feel like a disappointment in the end. After all, semisynthesis is the industry-standard.’

Standard synthetic techniques had to be used to produce vinblastine from the two precursors made by the yeast. Researchers are still working out how exactly Madagascar periwinkle performs this final step

‘This study beautifully demonstrates the power of metabolic engineering in providing scalable solutions to accessing high-value compounds that are intractable targets for synthesis,’ comments Paul Race, who investigates natural product synthesis at the University of Bristol, UK.

‘Fermentation-based manufacturing holds the potential to reduce crop farming of natural and scarce resources, limit waste streams and democratise and regionalise manufacturing of essential medicines,’ says Jensen. However, he points out it is early days as the current strain is not yet producing relevant amounts for commercial scale-up.

‘What is particularly exciting is the potential to use the microbial platform to access upwards of 3000 additional chemically related monoterpene indole alkaloids, many of which are high-value targets in their own right,’ says Race. ‘Despite the fact that oncology pipelines are brimming with new prospective leads, it is clear that molecules derived from natural sources retain a therapeutic competitive advantage that warrants the degree of effort and investment employed in this study to secure their supply.’