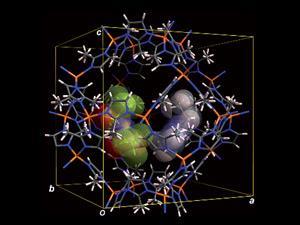 Ionic liquid conductivity decreases at low temperature. To overcome this, a team of researchers from across Japan have combined an ionic liquid with a metal–organic framework (MOF) to produce an unusual material that retains its conductivity below –20°C. This low-temperature conductivity, together with the attractive ionic liquid properties of non-flammability and negligible volatility, could open up the potential for safe battery and capacitor materials for use in extremely cold conditions.

Temperature drops cause ionic liquids to slow down and form an ordered frozen phase. Kazuyuki Fujie, from the Kyocera Corporation R&D centre in Kagoshima, and co-workers demonstrated that a select choice of framework can interfere with ion pair interactions to prevent this phase from forming. ‘It is a challenge to prevent ionic liquids from freezing without chemically modifying the ionic liquid itself,’ says Fujie, but by combining MOF ZIF-8 with the ionic liquid EMI-TFSA (1-ethyl-3-methylimidazolium bis(trifluoromethylsulfonyl)amide) the team have confirmed that the ionic liquid–ZIF structure is more conductive than that of the same bulk ionic liquid below –20°C.

As for their potential use in low-temperature power supply, Fujie believes that the ionic liquid–MOF is potentially useful if a better combination of ionic liquid and MOF is found. ‘At this time, an enhancement of the conductivity and reduction in the cost are needed to replace existing technologies.’