Ringing in the advantages of alkyne methathesis 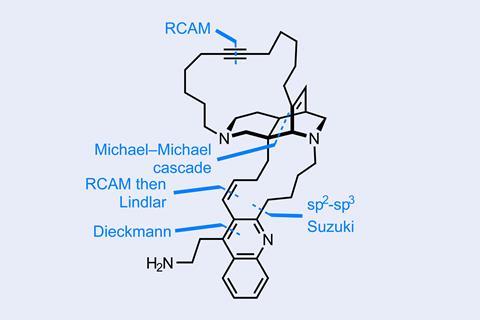 When I think about the new chemical reactions discovered in my lifetime, they’ve been less ‘Eureka!’ and more grind. As organic chemistry prepares to close out its second century, we’re not tripping over new reactions the way that we used to, and those we do find tend to be far more complex and in need of fine-tuning than those we’re taught in school. The gap between such methods appearing in the pages of a journal and chemists trusting them enough to plan their use 15 steps into a total synthesis is often measured in years – if not decades.

One reaction that’s been hovering on the edge of relevance for a few years is alkyne metathesis, which is generally viewed as a poor cousin to the Nobel-winning alkene version, despite being discovered around the same time. Unfortunately, although the ability to chop-and-change triple bonds at will sounds cool, the reality has generally been less appealing. The necessary catalysts are far less well-developed (read: generally finicky), and there’s also the cost of preparing the alkyne starting materials, which take more steps and effort than simple alkenes. However, ring-closing alkyne metathesis (RCAM) in particular has at least two great strengths. The first – and most obvious – is that it produces cyclic alkynes. True, we don’t need to make these often, but there actually aren’t many appealing options to access them. Secondly, RCAM sidesteps the great bugbear of alkene metathesis – controlling alkene geometry. As powerful and easy as alkene metathesis now is, it’s often bedevilled by mixtures of products that are famously difficult to separate. RCAM can solve this problem as many reliable methods exist to convert the alkyne products to either geometry of alkene (albeit at the cost of a few more steps).

Recent work from Alois Fürstner’s group at Germany’s Max Planck Institute in Mülheim and der Ruhr, who’ve long been pioneers in this field, showcases both of these advantages.1 The group synthesises a number of natural products, but here I’ll focus on just one. The complex core of njaoamine I is quickly prepared using a Michael cascade that uses one stereocentre to set six more (although three are quickly destroyed in subsequent steps; figure 1). After an earlier and more elegant strategy ran into issues, one of the alkynes is protected as the somewhat unusual-looking 1,2-dibromoalkene, which serves as a stable surrogate.

After tacking on a few more sidechains, it’s time to close some rings. Historically, molybdenum alkyne metathesis catalysts have been extremely sensitive to both air and protic functional groups. Here, however, the newly-developed ‘canopy’ catalyst does an admirable job of snapping shut the first ring in the presence of two basic nitrogen atoms and four halogens – impressive for any metal catalyst. The alkyne is then stereospecifically converted to the cis alkene, and amide reduction and elimination set the stage for the second RCAM, which ties the final macrocycle and completes the target’s carbon skeleton in near-perfect yield (figure 2).

Unfortunately, it turns out that the originally reported structure of njaoamine I was incorrect, but the group is able to propose a new one based on this work and painstaking NMR studies.

For me, this neat synthesis highlights both the best and worst features of RCAM. Thanks to years of effort by the Fürstner group, this long-unloved and impractical reaction is starting to get the attention it deserves!