In 1675, Isaac Newton wrote a letter to his friend Robert Hooke, asking for critique of his papers and making his now famous remark: ‘If I have seen further, it is by standing on the shoulders of giants.’ Almost 350 years later, this aphorism is no less true. Although the sheer number of references in today’s publications belie the idea that a natural product synthesis ever truly stands alone, academic groups often try to use as much of their own methodology as possible in planning a campaign, sometimes to detrimental effect. Industrial chemists are far less shy about making use of the good work of others. Without the same publication pressure, their priority is to get molecules made, rather than to self-promote or innovate for the sake of it.

A recent total synthesis of zincophorin methyl ester from James Leighton’s group at Columbia University in New York, US, is a great example of a pragmatic and practical approach to a complex natural product from an academic group that pulls together chemistry old and new.1 The bar for this popular target was raised high in 2015 when Michael Krische’s team from the University of Texas at Austin, US, completed an impressive convergent synthesis in just 13 linear steps – around half the length of the previous record. Through strategic use of his group’s iridium-based transfer hydrogenative coupling reaction, Krische set a tough benchmark that I thought would probably stand for some time. However the Leighton group’s second attempt artfully combines their own crotylation methodology with a good handful of tactical hydroformylations, building on precedent from Krishe and Harvard University’s David Evans to get to the target in just nine linear steps!

The team’s approach to the tetrahydropyran fragment is particularly clever (Figure 2). First, a rhodium-mediated asymmetric hydroformylation installs an aldehyde along with the first stereogenic centre. Although the yield is slightly dented by formation of linear byproducts, it is easily good enough for a first step on a cheap starting material. This new stereocentre then directs a substrate-controlled crotylation of the new aldehyde with outstanding diastereoselectivity. Although crotylations are a mainstay of polyketide natural products synthesis – and a particular favourite of the Leighton group – it’s rare to see them work so well with such a simple reagent and no catalyst to help out with the selectivity. A second hydroformation then completes the pyran ring, and the anomeric hydroxyl is activated as the acetate. Finally, adding the titanium enolate of a Crimmins-type thiazolidinethione – followed by methanolysis of the chiral auxiliary – installs the eponymous methyl ester in short order. 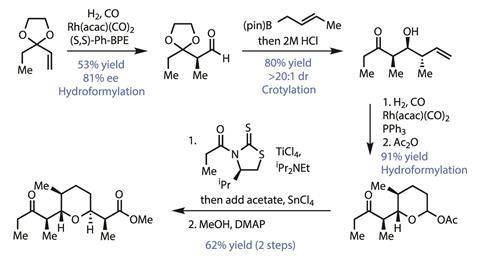 While it’s a darling of the bulk-chemical industry, and certainly not a new reaction, it’s rare to see hydroformylation feature prominently in total synthesis. Adding one carbon at a time might seem like a slow way to assemble a large molecule when every step counts, but the team uses it to great effect several times throughout this synthesis.

The synthesis of the other half of the molecule draws more heavily from the Leighton group’s own crotylation methodology, as well as their previous experience with zincophorin. However, the late-stage Julia-Kocienski olefination that united the two halves of the molecule in the group’s first total synthesis was too slow and unwieldy for the new route. Instead the researchers chose a daring aldol coupling reaction that simultaneously unites the two fragments, while establishing two further stereocentres. In just nine steps and 10% yield overall from cheap starting materials, this is an extremely impressive piece of synthetic chemistry!