A spanner in the works

Most drugs work by breaking or stopping something, rather than by making something faster or better 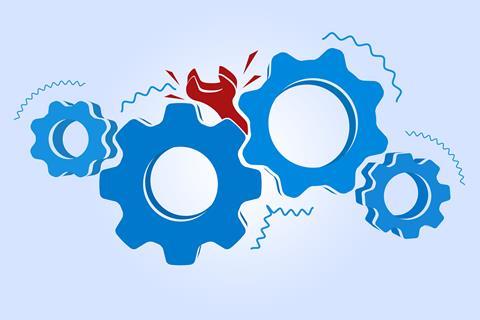 In most situations, drugs work on a similar principle to that of a well-aimed wrench being thrown into the gears of a complex machine

If you look at the pharmacopeia, the list of drugs we have approved and available, all the way from the early plant-derived compounds like digitalis and morphine and up through aspirin and antibiotics to the very latest therapies, you will see drugs targeted at a huge range of diseases. But there is a common feature to the vast majority of known drugs that may not be obvious at first: they generally work by causing something else to fail.

Consider some of the best-populated classes of drug mechanisms, those working through cellular receptor proteins and on enzymes. The clear majority of receptor-based drugs are antagonists, compounds that block the signaling of the receptor and keep it from responding to its natural ligand (either partially or totally). And the overwhelmingly larger set of enzyme-targeting drugs are inhibitors, compounds that work by blocking the enzyme’s active site one way or another to reduce its activity.

The true ‘direct enzyme activator’ stories can be counted on fingers

There are exceptions – agonist drugs on receptors cause them to respond more strongly or for longer duration than they might otherwise, for example. And there’s a whole class of drugs, with insulin leading the list, that simply try to replace a key biomolecule that some patients lack. But most of the time, in most situations, drugs work on a similar principle to that of a well-aimed wrench being thrown into the gears of a complex machine. We are trying to bring some select part of the system to a halt, and a good part of the search for new medicinal chemistry targets consists of finding things whose stoppage might be beneficial.

Put simply, it’s just easier to interfere with the many pieces of a living organism than it is to directly make them work better. Enzymes, for example, have all had long evolutionary histories that have optimised their activity to extraordinary degrees. The chances, therefore, of making one more selective or faster-acting through the binding of an outside drug molecule are very small indeed. The true ‘direct enzyme activator’ stories can be counted on fingers. But clogging up an enzyme’s active site with an extraneous molecule that’s hard to dislodge? There you have better chances.

So the art is to find situations where some disease mechanism can be usefully altered by causing some part of it to break down. A target that’s doing too much work in a given disease process is an obvious candidate, and you can try to shut these down directly if they have a ‘druggable’ site. But what about the situations where some activity needs to be increased? If you really do need a key enzyme to work harder, then look for something in the cell that naturally inhibits it, and gum up the process that produces this inhibitor. Or look for the signals that cause your enzyme to become less active or to be broken down and cleared from the cell: there may well be a phosphorylation step that helps to turn its activity off or down, for example. In that case, an inhibitor of the kinase enzyme that adds that particular phosphate group might be just what you need. These sorts of indirect ‘bounce shot’ mechanisms are widespread.

If you really do need an enzyme to work harder, then look for something that naturally inhibits it, and gum [that] up

One of the hottest areas of current drug research takes this idea even further. Targeted protein degradation hijacks the cell’s own protein-recycling machinery. Tagging particular proteins with ubiquitin side chains marks them for destruction in the cell’s proteasome. To get this to work, you have to look through disease mechanisms with an eye to the ones where yanking one particular part out of the cell completely would benefit the patient. An interesting complexity of doing it this way as opposed to finding a small-molecule inhibitor of that same protein is that many proteins have functions that may have nothing to do with their active site (associating with other proteins and altering their activities in turn, for example). Targeted degradation removes all of these, since it removes the whole protein by dropping into the cellular equivalent of a waste disposal shredder, while a standard inhibitor might leave several of a protein’s other activities still functional. Sometimes this is a desirable feature, but sometimes it may not be!

That, then, is a key secret of success in drug discovery (well, its earliest stages), and I am passing it on to you free of charge: look for things that you can inhibit, disturb, slow down, or completely destroy. And choose carefully!