Perhaps the most familiar (and dull - they do say that familiarity breeds contempt.) chemical reaction to medicinal chemists is the amide bond formation. Countless millions have been made, using an astonishing array of methods. However, to paraphrase my graduate supervisor ’if there are many ways of doing a reaction, none can be very good’.

As its name implies, mycalamide is one of these thorny beasts. Many a student, when presented with its clear game-of-two-halves structure in a retrosynthesis class, would pencil in the amide bond for a late stage coupling. However, when checking the literature for precedent, they would undoubtedly find that such an approach would leave them unstuck, as several researchers have tried and failed to connect this bond late in their syntheses. One might think that this would act as a deterrent, but that would be to underestimate the scientific mindset - this is a challenge, and one that Viresh Rawal and his team at the University of Chicago, US, clearly relished.1

They began by constructing the trioxadecalin fragment, buying in their initial stereocentre in the form of a chiral epoxide - benzyl-(S)-glycidyl ether. A vinyl cuprate addition into this epoxide, followed by a Johnson-Lemieux oxidative cleavage of the added alkene, left the group with a handy chiral aldehyde.

Working very directly, a hetero-Diels-Alder reaction using a Danishefsky-type siloxy diene2 built the dihydropyran, generating a new stereocentre in excellent yield. To get the best selectivity, this reaction required a rather specialised Lewis acid - methylaluminium bis(2,6-di-tert-butyl-4-methylphenoxide), known as MAD - which was developed by Hisashi Yamamoto while he was at Nagoya University, Japan (figure 1).3 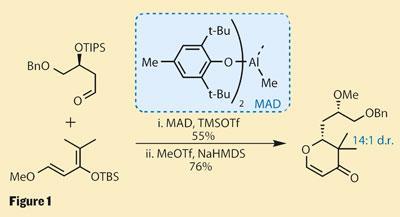 What makes this route particularly convenient is that the freshly constructed ring contains an enone group, and is therefore perfectly set for elaboration. Using a second Lewis acid promoted reaction - this time a Mukaiyama-Michael coupling - the group were able to generate a further pair of stereocentres, and needed only a few more steps to complete this complex fragment (figure 2).

As perhaps they expected, attempted amide coupling of the two halves met with failure. Using a variety of bases, the amine could not be persuaded to react with the requisite acid chloride. But the group was prepared for this. Rawal supposes that the problem is steric - two large fragments are more awkward in union than smaller intermediates. Further, Rawal suggests that the crux of the problem is obstruction of the amine by the bulky protected glycol moiety - a difficult problem to solve this late in the synthesis.

The team’s solution, though, is inspired - use ’chemical handcuffs’ to tie up the hindering groups. They did this by forming an isocyanate, which then coupled with the terminal hydroxyl of the glycol to complete a macrocyclic carbamate. This might seem like a bizarre diversion, but it actually provides additional rigidity, locking the amine into a favourable conformation for reaction.

Using the same acid chloride as before, the group managed a respectable 45 per cent yield of the coupled product, and recovered a useful amount of unreacted macrocycle to recycle. Cleverly, this molecular restraint was of the softer variety, requiring only a little salted base to come undone - conditions that also removed the remaining benzoate protecting group (figure 3).

More than just a clever and succinct synthesis, this work demonstrates an underused strategy, and a thoughtful approach to failed synthesis. It also shows that sometimes failed science can be as useful as successful science - as a fresh mind might connect the unsuccessful dots.