There was no mention of science in George Osborne’s budget statement on 8 July, which is unusual for a chancellor of the exchequer who has often spoken about the vital role that research and innovation play in economic growth. So we must wait for the outcome of a spending review in the autumn to learn the fate of the science budget, which has been frozen for the past five years – effectively a decline in real terms.

In this climate of austerity, it’s hardly surprising that scientists lobbying for research cash want to play up the economic benefits that it can offer. Yet despite this emphasis on commercial payback, academics often have little awareness of what it takes to bring a technology from the lab to the marketplace – what makes a successful product, or how much time and money is needed to deliver it. That needs to change if science is to deliver on its economic promises. 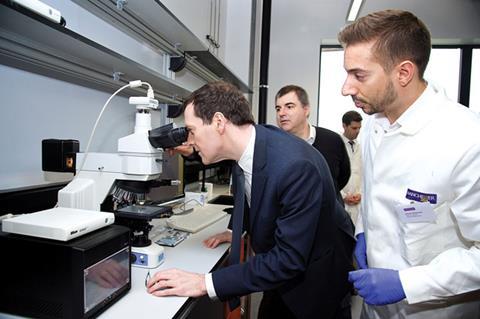 The long, hard road to market

On the day before Osborne’s budget, the Royal Society of Chemistry launched a brochure filled with inspiring case studies demonstrating how basic research, often funded by the taxpayer, can translate into applications that benefit the country’s economy.

For instance, a fluorescent sensor for monitoring pH and ion concentrations in blood began with research by A P de Silva at Queen’s University Belfast in 1985. Following a collaboration with Roche in 1998, this ultimately led to a commercial blood analyser that racked up more than $50 million (£32 million) in sales from 2008 to 2013.

Another example covers Hagan Bayley’s research on membrane proteins at the University of Oxford, which was commercialised by the spin-out company Oxford Nanopore Technologies (Bayley was named Chemistry World Entrepreneur of the Year in 2008). After $180 million of R&D investment, the company – now valued at $3 billion – has launched a nanopore-based DNA-sequencing system that is smaller than a mobile phone.

These examples show that investment in basic research can pay off handsomely. But they also highlight the long development timelines involved, as well as the need for substantial investment or close collaborations with established companies. According to Peter Dobson, the former director of Oxford’s Begbroke Science Park and himself a founder of several spin-out companies, an application that required £1 million in basic research funding might burn through 10 times as much in development, and cost £100 million to reach manufacturing. For many scientists, these challenges can come as a nasty surprise.

Take graphene. Europe’s Graphene Flagship project aims to usher the atom-thin sheets of carbon from the lab to market over the next decade, and some of the scientists involved had expected companies to fall over themselves in a rush to adopt the wonder material.

But in March, Konstantin Novoselov – who shared the 2010 Nobel prize in physics with his University of Manchester colleague Andre Geim for their graphene work – told the Financial Times: ‘It is very hard to bring a new material to market … We have had to learn the hard way. Unfortunately the rules of the game are not set by the rules of scientific knowledge but by the rules of economics and development … where money goes is not always where the best technology is.’

Novoselov is absolutely right. Market-driven applications are far more likely to succeed than those sold purely on the basis of clever science. Identifying that market need is an essential part of the process – and scientists need to be better equipped for the task.

A mark of esteem

A government-commissioned report by Ann Dowling, president of the Royal Academy of Engineering, has some timely suggestions for improving business–university research collaborations. Released on 2 July, the Dowling Report recommends that graduate students should learn how commercial R&D works, so that they grasp the basics of intellectual property and business planning, and understand the importance of technical market research. They should also have the opportunity to develop first-hand experience of industry through placements.

And academic researchers who embark on commercial ventures should receive recognition from their universities. ‘Spending time in industry should be seen as a mark of esteem that enriches their career, analogous to gaining international experience,’ the report says.

Universities and departments also need to strengthen links with companies so that researchers from both sides can spend extended periods of time in each others’ workplaces. These secondments can be facilitated by an industry advisory board – if a department has one – or developed through networks such as Innovate UK’s Knowledge Transfer Network. Indeed, rather than setting up vulnerable spin-outs, it may make more sense for academics to partner with established companies. Yet as the Dowling Report notes, funding must be available to kick-start those collaborations.

It’s perfectly reasonable to build an economic case for basic research. But scientists making this argument should be lobbying just as hard for the practical and financial support needed to underpin the training, networks and start-up investment that are all essential to commercial success.