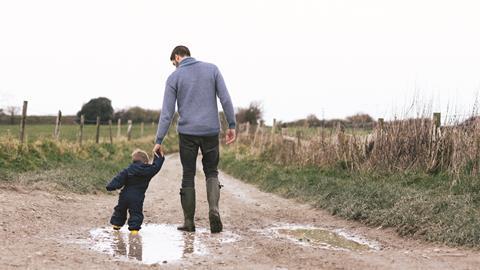 As a society, we remain very far from equality in terms of parental and caring responsibilities. Although there is UK legislation for shared parental leave, the current take-up among fathers is shockingly low. Indeed, the 2017 Royal Society of Chemistry pay and reward survey showed that amongst members, of all those taking leave for childcare of any sort, 95% were women and only 5% were men. National UK surveys also show that on average, women spend more than twice as much time providing childcare than men, and the data also indicate that women take on the majority of other caring roles, such as for elderly or sick relatives, as well as doing 60% more housework than men.

As with all diversity issues, societal expectations influence parental decisions. Men are often labelled as ‘exceptional dads’ even for just doing their fair share. Women, on the other hand, are sadly still often viewed as unusual if they decide not to be the primary carer.

This disparity is compounded by scientific academic working life, which holds ‘macho’ expectations, such as long working hours and miles travelled, to demonstrate career success – an idea that stands in direct opposition to caring responsibilities. In reality, scientific achievement is about quality of ideas and innovation in approach – neither of which are limited by the hours you work. Indeed, some of my own department’s most highly-awarded, internationally recognised researchers achieved their success whilst bringing up their families and working part time.

Many people, of any gender, understandably worry about the impact that childcare and part-time or flexible working will have on their careers. Currently, there is often a lack of support for those with childcare responsibilities in science – which in turn results in a negative impact on careers. Men can play a vital role in getting more involved with their young children, as well as helping women advocate for change in the workplace.

Although society is beginning to change its attitudes to gender roles, thanks in large part to the invaluable work of strong female voices, progress remains painfully slow. I believe that in the absence of such expectations, men would be more involved in childcare. For example, I am a gay parent and my husband and I had no preconceptions about who would do what. We started from the assumption that childcare should be split evenly and worked from there – why would partners do anything else?

I work in a department at the University of York, UK, that has held an Athena SWAN gold award for a decade in recognition of its work in promoting and supporting the careers of women in science. This includes crucial initiatives such as family-friendly working hours, the promotion of female role models, departmental pay gap analysis, a flexible working guarantee and a part-time working assurance. Although these initiatives are primarily targeted at redressing the imbalances faced by women in the workplace, it is evident that this approach benefits fathers as well as mothers. Furthermore, this can begin to change the wider perceptions of gender roles.

When we adopted our son, my department was very supportive of me taking term-time leave and then working part-time, which I did for the first year while he settled into our home. I knew that I could transition back to full-time work when the time was right. This same assurance has meant that many academics, regardless of gender identity, have taken advantage of part-time working patterns – currently, more than 10% of York chemistry academics do so. At present, I am once again exploring patterns of part-time work that would allow me to better match my working patterns with school term-times.

I have no regrets about changing the pattern of my academic life to embrace fatherhood and caring responsibilities: adopting a child is a very active choice, not something you fall into half-heartedly. You only get one shot at being a dad – I want to get it right. I also acknowledge that I was lucky in being quite a senior academic, already a full professor, when making these decisions. We have to ensure young academics, both men and women, are empowered with the certainty that they will also be supported, and can still have successful careers, even if they balance different priorities at different stages in their personal and career development. Senior scientists have a responsibility to recognise success in appropriate ways and make sure colleagues do not define achievement to the exclusion of their home life.

It is vital to support women in the workplace through initiatives like Athena SWAN – but it is also important to start and maintain a conversation in which men’s roles in the home are interrogated. Scientific research has a flexible working environment, filled with intelligent, talented thought-leaders, and is therefore ideally placed to lead the way in removing the association between gender and different roles.

I hope that attitudes will continue to change and increasing numbers of men will embrace their role as carers. Indeed, perhaps at some point in the future, those men who fail to significantly adapt their working patterns will be seen as the exceptions. Ultimately, at a wider level, greater parental equality would have huge impacts in workplaces everywhere, while also creating happier families and a more equal society.