Facts are not enough to combat chemophobia, says Mark Peplow

Pregnant women: fear your sofa. For many people, that was the message of Chemical exposures during pregnancy, a report released in June by the Royal College of Obstetricians and Gynaecologists (RCOG). Critics quickly lambasted it as the latest example of ‘chemophobia’ – an irrational fear of all things chemical. 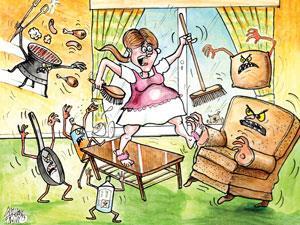 Yet the report’s authors did not set out to make people nervous about their furniture. Conscious that pregnant women were being unnecessarily worried by ‘frequent “chemical scare” stories in the media’, they hoped to outline the available evidence about the risks of low-level exposure to certain environmental pollutants, enabling women to make an informed choice about the products they use. So how did it all go so wrong?

Although the report is a slim offering – actually just four pages of body text – it does contain all the necessary caveats. It reminds us that correlation does not imply causation. It notes the limitations of animal studies and the confounding nature of synergistic effects that can amplify the impact of multiple toxic compounds. It even reminds us that ‘natural’ doesn’t mean safe.

But then the authors overreach their remit in truly spectacular fashion. ‘One option is not to do anything,’ they write. ‘But, this may cause anxiety levels to rise which could be deleterious for mother and baby. In this instance, the approach recommended is for such women to put “safety first”. That is, to assume that risk is present even when it may be minimal or eventually proven to be unfounded.’

This is not science. It is advocacy for a way of life that sounds like a route to insanity, or at least mind-numbing boredom. Already bombarded by (often unwanted) advice, pregnant women are encouraged to further immerse themselves in paralytic fear for their unborn child. No more barbecues for you (polyaromatic hydrocarbons); better not buy a new car (phthalates) or a non-stick frying pan (perfluorinated compounds); don’t rest your weary feet on that flame-retardant furniture (polybrominated diphenyl ethers). Worried? Not half.

This advice, albeit well intentioned, is unfortunate and unhelpful because it reinforces the public’s discomfort with chemistry. Perhaps the most obvious manifestation of that discomfort is using ‘chemicals’ as a synonym for any molecule that poses a potential health threat. It is certainly an annoying trope that featured in media coverage of the report and, understandably, it makes chemists angry. But loudly blaming chemophobia on public ignorance can obscure a deeper problem for chemistry as a field.

Chemophobia arises from a lack of trust in your profession, particularly its commercial side. There are many examples of life-enhancing products (benzene aftershave, anyone?) that were subsequently found to be harmful, and accidents like Seveso or Bhopal have a way of sticking in the mind.

The fact is that some chemicals in our environment can cause adverse health effects. Few would argue that the decision to stop adding tetraethyl lead to petrol was the result of irrational chemophobia, because there is ample evidence that chronic lead exposure can cause neurological problems. Indeed, the dangers were already well known when the fuel additive was launched in the 1920s. The US National Lead Company had admitted that lead was a poison, and the League of Nations was arguing for a ban on lead paint. Yet in 1925, even after 15 workers died from their acute exposure to tetraethyl lead, a US government inquiry concluded that its use should continue. Only in the 1970s did the nascent US Environmental Protection Agency begin its 20-year battle to phase out tetraethyl lead. The public health legacy remains with us today – as do doubts about government oversight of chemicals.

Many other cases are not so clear-cut, though, and that presents people with a huge dilemma: how much evidence is needed before worries about exposure to a particular chemical become rational? The RCOG report’s trite recommendation to avoid all routes of exposure is not the answer. Instead, whenever the science is uncertain, chemists can elevate the debate by helping to make sense of the risks and benefits of chemistry. Tempting as it might be, a reflexive defence of all chemicals reeks of a whitewash. We should not shy away from acknowledging limitations in the science, or dismiss the questions people have about the trace amounts of synthetic compounds found in their bloodstreams.

These conversations provide a way to foster a broader sense of trust in your field. Classic outreach activities like talking to people at science festivals or taking part in schools visits are more than teaching sessions – they show that scientists are mindful of the broader implications of their work, and committed to responsible behaviour. And for those who feel they do not have the time, skills or inclination for outreach: surprise, you’re already doing it. Every time you introduce yourself to someone as a chemist, their attitudes towards science are being subtly shaped by your interaction.

Understanding and addressing people’s concerns in these ways could be crucial to defusing chemophobia. Simply complaining that people are stupid will not make them trust you more.