The pharma industry should be more open with its trial data, says Derek Lowe 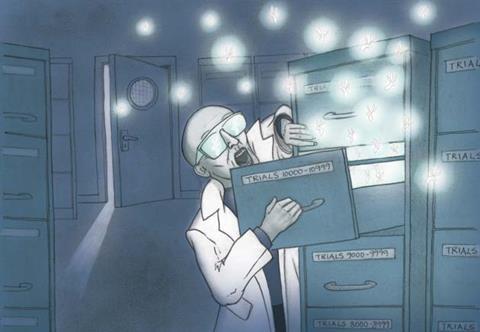 I’ve been meaning to comment on all the recent calls for the drug industry to be more open with its clinical trial data. But it’s hard for me to come up with anything more than ‘I think it’s a good idea!’ Now, that might strike you as odd given the diversity of pharma-related topics I’ve written about over the years. But the reality is that on this one I’m rather a long way from the action.

I’m in early research. That’s a term that means different things to different people. Not long ago, for example, I was talking to a newer employee at my company, someone who’d been hired over in the business end. I told her the same thing, and her response was ‘Oh, you mean phase I compounds?’ I had to explain to her that for people like me, phase I is a distant endpoint, a promised land to which only a few favoured compounds are rumoured to ascend. This sort of thing has happened to me several times. I’ll run into someone who works in development, and mention that I’m on early-stage projects, whereupon they’ll ask me about things that would have left my hands a couple of years ago. When I list the projects I’m actually working on now, I get blank stares. No one downstream has even heard of them.

And rightly so. The wide, steep funnel shape of drug research makes these sorts of disconnects inevitable. Most ideas for projects never turn into projects at all, and most of those early projects don’t deliver anything that can be taken on. There’s no need for someone way down in the development process to keep up with the firef ly f lickers of all the early research work; it would be a waste of time, considering what else they have to do. They’ll hear about projects only after things are working, and if that sometimes gives people odd ideas about how many projects actually work, well, that’s hard to avoid.

But this also means that I don’t have much of a connection with the people doing the clinical trials, and I especially don’t get near the raw data they generate. That stuff is guarded closely during a development program, not least (for a publicly traded company) because of securities law. There’s no inside information more ‘inside’ than the results of a crucial trial, and the number of people who get to see the whole picture before the press release can often be counted on your fingers.

With that disclaimer out the way, I’ll attempt to add some nuance to my ‘it’s a good idea’ position.

‘Don’t trade the company’s stock on material information,’ a lawyer once told me, ‘and in case you’re wondering, material information is probably anything that makes you think about trading the stock’. In fact, there are a lot of reasons to hold onto clinical data, but I think that these are outweighed by the harm that can be done. There have been too many accusations of companies burying inconvenient trial results, and given the incentives, I don’t doubt that it happens. Nor do I doubt that this behaviour damages even more the severely dented reputation the industry already enjoys. Throwing the databases wide open would (in the US, at any rate) be an invitation to the trial lawyers to troll through the numbers looking for opportunities to sue, and they’re a creative bunch, but there’s plenty that could be done to mitigate this. I think the recent GlaxoSmithKline announcement (see page g), for example, makes sense, on the face of it. They’re offering people a look at the data, but reserving the right to vet the requests. Done properly, this could work (and done improperly, it could be a more sophisticated way to stonewall).

I’d like other companies to follow that lead, but my guess is that several of them are waiting to see how things work out for GSK’s experiment. For their part, I think the company would do well to publicise how many requests they’ve had for its data, and how many they’ve approved. They should also say who’s made those requests, and what the problems were with any they rejected. That might give some other companies the push they need. Full disclosure should work in every direction.