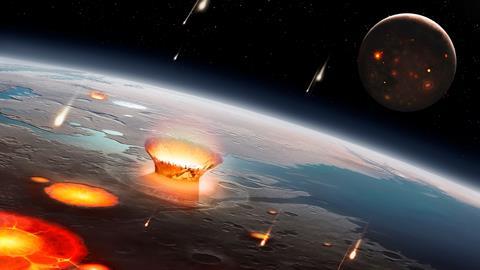 It is one of the big unsolved mysteries: how did life on Earth start? Researchers in Germany are now arguing that a meteorite impact could have created the molecules that gave life its big break. Their experiments are the first to show that the mechanical energy released during an impact could have transformed simple chemicals into amino acids.1

There are various theories on how simple chemicals were transformed into amino acids, lipids, carbohydrates and nucleic acids on ancient Earth. These include submarine hydrothermal vents 3.5 billion years ago, or volcanic activity even earlier on, during the chaotic Hadean era.

However, José Hernández from Aachen University and colleagues found that a meteorite strike could have generated the first amino acids from a few simple components. Mechanical forces and friction generated during such an event can catalyse chemical reactions – a concept exploited in mechanochemistry. Here, ingredients are ground together without any solvent or heating, usually in a ball mill.

The idea that friction between rocks could have started reactions on early Earth came to Hernández a few years ago during a holiday in Rome. ‘I was standing in front of the Coliseum. Everybody was taking pictures but I was looking at the floor and saw these very round stones,’ he recounts. He took a few of them back to Germany and found that they could replace metal milling balls in his mechanochemical experiments.2

‘There have been many studies that have shown meteorites as shuttles for material that ends up on Earth,’ Hernández says. ‘But we were interested if the mechanical energy of those landings could have activated certain chemical systems.’ The team simulated this by milling an aldehyde and an amine with potassium cyanoferrate and silicon dioxide. An hour and a half later, the reagents had converted into α-aminonitriles, precursors to amino acids.

At first, the researchers were surprised that the reaction worked at all, since it was missing one key ingredient: cyanide. Although potassium cyanoferrate is a potential source that could have existed on early Earth, it is very stable and only releases hydrogen cyanide at extreme temperatures.

‘But mechanical milling is able to challenge this high activation energy,’ enthuses Judit Šponer, who researches prebiotic chemistry at the Academy of Sciences of the Czech Republic, but wasn’t involved in the study. ‘I loved the concept,’ says Šponer. ‘The beauty is in its simplicity.’ Although accurately reproducing the whole prebiotic environment in laboratory experiments remains challenging, she adds that ‘the mechanochemical approach is a piece of the bigger picture that has never been considered before’.

Hernández and colleagues now want to see if other key prebiotic molecules, like nucleobases or cyanamide, can be made by mechanochemical means.