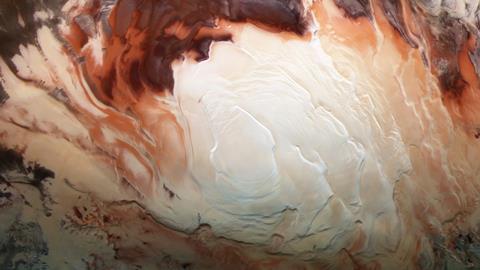 Is there life on Mars?

Signs of liquid water on Mars are no space oddity

Conspicuously missing from the report1 of a shallow, buried lake of liquid water on Mars, or from the accompanying commentary,2 was any discussion of the astrobiological implications. This is probably as it should be: the result tells us nothing in itself about whether there is, or ever has been, life on Mars. But while planetary scientists have a host of good reasons to be interested in the hydrological past and present of the Red Planet that have nothing to do with putative martian life-forms, for the wider public that is the question looming over the search for water on Mars.

The lake itself is about 20km across and a few metres deep, filled with strong brine and buried under about 1.5km of dusty ice on the Planum Australe at the martian south pole. There’s almost a knowing coyness to the way it has been compared with the similar bodies of water known to exist under our own Antarctic ice sheet. Sure, the comparison relates to the geographical setting. But it’s well-publicised that the subglacial Antarctic lakes host a rich ecosystem,3 showing that life is possible even in this seemingly inclement and barely accessible setting. Scientists have drilled down into such lakes and brought up water full of microbes.

Of course, it would be absurd to suppose that the same is likely to be true of the martian lake. Let’s not forget that the finding itself is still tentative. It is based on radar soundings of Mars’s surface made by the Marsis instrument on board the European Space Agency’s Mars Express spacecraft.1 Liquid water would be evident within the ice as a brighter radar reflection, due to the change in the permittivity (the response to an electric field) of the material that the radar waves pass through. Roberto Orosei of the National Institute for Astrophysics in Bologna, Italy, and his colleagues have considered other possible explanations for the bright patches they detected within the Planum Australe, and conclude that it is hard to find any other that seems as plausible as the water layer. But it’s wise to regard that conclusion as provisional until it is verified by independent means. It’s hard to imagine any kind of robotic drilling investigation in the foreseeable future, but Nasa’s Mars Reconnaissance Orbiter, currently orbiting the planet, has a radar instrument that might be brought to bear.

Still, let’s for now accept the findings as claimed. The water is thought to have a temperature in the region of –268°C, but kept liquid by a combination of the pressure of the ice above and the freezing-point depression from the presence of large amounts of dissolved salts: magnesium, calcium and sodium perchlorate, which are known to be present in the martian regolith (‘soil’). It’s not acknowledged enough that this pressure-induced effect is itself a peculiarity of water, specifically of the negative slope of the melting line in pressure-temperature space – which, as the Clausius-Clapeyron equation indicates, follows from its expansion on freezing.

The icy cap at Mars’ southern pole. But could liquid water exist below the surface?

A key question then becomes whether the high salinity of the water necessary for such a freezing-point depression exceeds the known bounds for life. Of course, we’re talking here only of the ‘life as we know it’ variety, but that at least gives us a frame of reference. Certainly, there are halophilic bacteria found in highly saline terrestrial environments, including the Antarctic subglacial lakes, which have a salinity about six times greater than seawater. And there’s some reason to believe that all kingdoms of terrestrial life observe a common threshold of water activity aw – that being the key measure determined by salinity in this case – of around 0.6.4

Although it’s not clear if the Marsis radar signal allows one to extract a good estimate of salinity, the martian lake seems likely to be comfortably above this limit. At any rate, such considerations help the discussion of the lake’s habitability to go beyond mere handwaving. Of course, establishing whether the martian environment falls within the habitable limits for terrestrial organisms won’t tell us anything about life evolved on another world – but it seems worth knowing if life can exist there in principle.

Can life persist in isolated pockets like this? When martian life was raised in the late 1960s as the first Mars landers (the Viking missions) were being considered, environmentalist James Lovelock suggested that life might be an all-or-nothing affair: either it takes over and transforms a world, or it fails to get a foothold. But the discovery in the 1970s of thriving ecosystems around hydrothermal vents, feeding off the local heat and chemical gradients with no need of photosynthesis, brought a new perspective to that discussion. These vent communities are, of course, not wholly isolated from the biosphere above, not least because the latter influences climate and ocean circulation. But they permit some of the questions to be sharpened.

In other words, there’s nothing disreputable, or irreducibly speculative, in asking astrobiological questions about the putative martian lake. The point – as so often it is in science – is not necessarily to arrive at answers, but to find better ways of framing the question.