Organic chemistry is a broad science full of varied details, as anyone who has had to unwillingly study it can confirm. Over the decades, we have built an impressively large list of reactions – all sorts of interconversions, couplings, transformations, and rearrangements. No one person can know and remember all of it by now, although (as the more successful organic chemistry students come to realise) knowledge of some fundamental behaviours and properties will take you a long way towards keeping it all straight. 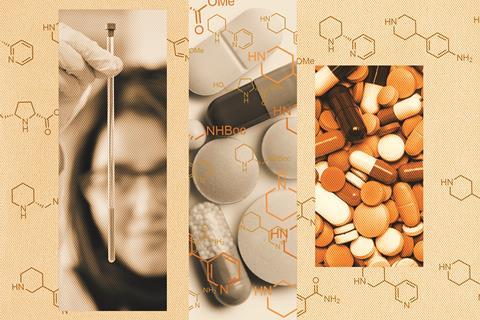 Much of the diversity in drug libraries is derived from the vast and expanding array of interesting amine building blocks available.

Some of the trickiest organic chemistry available is total synthesis of natural products, and it brings out all sorts of unusual reactions. But what about small molecule drugs? Medicinal chemistry is (rather famously) not quite like natural product synthesis. There’s the same any-weapon-to-hand attitude, but the weapons we use in the biopharma labs are mostly variations on just a few classic general reactions, the sorts of things that students might well learn in their first year. That’s because reactions don’t get to be such classics unless they work almost all the time on almost every sort of starting material, and that’s just the behaviour we need when we’re making new drug candidates. Honestly, most of our compounds won’t do what we want when we test them anyway, so the less time and effort spent on their synthesis, the better.

We’re frankly a bit sheepish about this. A lot of us come out of demanding, tricky chemistry training only to find ourselves banging out amide formations and metal-catalysed couplings much of the time. The med-chem literature is full of calls for new chemistry and warnings about how overreliance on a few transformations leads to too many similar compounds. There’s a new paper by chemists at AstraZeneca, though, that asks whether all this is actually true. The authors went through years of records in the company’s electronic lab notebook system, and found (as expected!) that about a third of all the compounds that had been synthesised as screening candidates had been made by good old reliable amide coupling reactions. They took 10,000 of these at random and compared them to 10,000 other compounds that had been made by other bond-forming reactions entirely, looking for structural diversity and novelty.

And the amides didn’t come out looking too bad! They had slightly greater complexity (by several computational measures) and fewer of them were exact matches with known compounds. The amide group tended to have more chiral centres and somewhat higher molecular weights, but their other properties were quite close to the non-amide set. On closer inspection, this turns out largely to be because there are so many new and interesting amines available for these amide couplings. Both chemical suppliers and medicinal chemists inside drug companies have realised that amine building blocks are so versatile that buying or making new ones is well worth the effort. That, for example, is where those chiral centres in the amide set are mostly coming from: they were bought in the form of chiral amines. The researchers say that this trend has been growing so robustly that they see no signs of peak amine being reached any time soon.

The paper concludes that synthetic complexity and diversity really isn’t a function of how interesting the chemistry is that’s used to make the molecules. Rather, it’s more due (at least these days) to the deployment of money and effort to obtain interesting building blocks, which are then combined with all sorts of diverse partners. The amide bond in the middle of all these molecules is neither an embarrassment nor a missed opportunity: it’s a reliable molecule-building technique that leads to more new compounds more quickly and more reliably than almost anything else could have.

The lesson, then, is that we medicinal chemists should stop apologising and feeling guilty about running all these coupling reactions. Our work is a means to an end (a new drug), and this is one of the best ways we have of reaching one. If you want to challenge your synthetic skills and your knowledge of the far reaches of the literature, the way to do it is to come up with new ways to make unusual amine compounds. They are the gift that keeps on giving; they’ll appear in who knows how many diverse screening compounds as the years go on. Embrace them!