Karl Collins contemplates reducing amides to alcohols instead of amines

Reducing amides to primary alcohols may instinctively seem like a simple functional group transformation. But as undergraduate chemists soon find out, this unfortunately isn’t the case. Reacting amides with common reducing agents typically gives the corresponding amine following C–O bond cleavage (figure 1). Although a number of approaches have been developed to give access to the corresponding alcohol via C–N bond cleavage, a general and operationally simple method has remained elusive until now.

David Procter’s group from the University of Manchester, UK, uses SmI2 – a single-electron transfer reagent – to reduce amides to alcohols.1 Over the last 5–6 years, the Procter group has developed methods for reducing a variety of functional groups using SmI2. Having already established conditions for reducing lactones, esters, carboxylic acids and nitriles, the team has now provided a simple, mild and general reduction of amides.

Extending SmI2’s scope as a reducing agent has evolved from the Procter group’s long-standing interest in the way its activity and reactivity can be modulated with different additives. This tuneability has been exploited in different ways ever since Henri Kagan of Paris-Sud University, France, first introduced the reagent in 1977.2 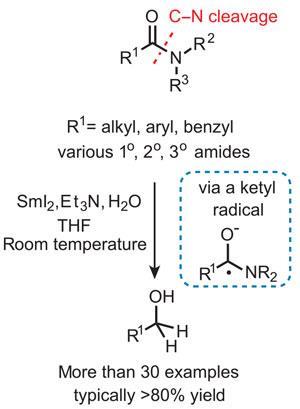 In undertaking a systematic study of water as an additive, Procter’s team discovered that the combination of H2O and Et3N, in an optimal ratio relative to SmI2, produces a far more potent reducing agent than SmI2 alone. In the absence of additives, esters, carboxylic acids, amides and nitriles all resist reduction by SmI2. However, with the appropriate additive combination, each can be reduced.

Having established this powerful reductive system, the team has most recently investigated amide reduction. Using SmI2, the C–N bond is cleaved startlingly selectively, generating primary alcohols (figure 2). Primary, secondary and tertiary amides are all readily reduced to primary alcohols at room temperature in excellent yields. The only reported exception is a sterically hindered diisopropylamide, which resists reduction under the reaction conditions. This will come as a blow to chemists in the field of C–H activation, for whom diisopropylamides are the archetypal directing group.

The synthetic power of this reduction extends to cleaving chiral auxiliaries, which are an integral aspect of asymmetric synthesis. Using the SmI2–Et3N–H2O reagent system, the team effectively reduce pseudoephedrine auxiliaries that are used for controlling diastereoselectivity in alkylation reactions (as introduced by Andrew Myers from Harvard University, US); and the oxazolodinones made popular in aldol chemistry by David Evans, also at Harvard (figure 3). In each case, the amide is cleaved to give the primary alcohols in excellent yields, and most importantly, the integrity of the adjacent enolisable chiral centres is not affected. 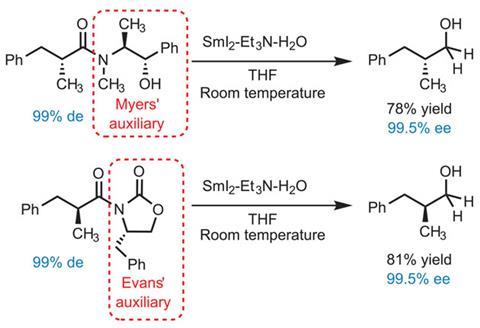 A number of mechanistic studies including radical clock fragmentation, isotopic and kinetic studies suggest a typical single-electron transfer mechanism, in which the initial electron transfer gives a ketyl radical intermediate (figure 4). A second electron transfer to give a carbanion that is subsequently protonated would generate an anionic hemi-aminal that can collapse, cleaving the C–N bond. While forming ketyl-type radicals in SmI2-mediated reactions is not novel, the potential to exploit these unusual ketyl radicals in cyclisation and migratory pathways is very exciting.

Figure 4 - The proposed mechanism proceeds by generating a ketyl radical

Inevitably, there are some downsides. As long as catalytic variants of SmI2 reagent systems remain elusive, widespread application of these reactions is vulnerable to the need to use large amounts of reagent (4–8 molar equivalents). Furthermore, as SmI2 is typically prepared as a 1M solution in tetrahydrofuran, solvent volumes can become prohibitive on scale, though industrial processes for using it are established. And although the reaction demonstrates moderate functional group tolerance, this very powerful reducing agent is subject to the same selectivity issues associated with more common hydride reducing agents: ketones, aldehydes, esters and the like will all be reduced under the reaction conditions. Despite these limitations, this elegant work provides a general and effective reduction of amides to primary alcohols and I have no doubt it will begin popping up in many a synthetic route.

Karl Collins (@karlDcollins) is a research associate at the University of Münster, Germany, and blogs at A retrosynthetic life