Acid vapours are problematic on scales at which they corrode cars and cause acid rain, says Chemjobber

The best sensation of walking into a chemical laboratory is hearing the natural airflow of the fume cupboards. Thanks to many late nights in the lab in graduate school, the quiet rumble of the motors moving many cubic metres of air is very comforting to me. The hoods keep volatile compounds from moving into the rest of the laboratory, protecting chemists from toxic compounds, foul smells and irritated co-workers.

If you set up a modest-sized acidic reaction (for example, using thionyl chloride to form an acid chloride from a carboxylic acid), you might consider connecting a hose from your condenser to a flask of sodium hydroxide solution – with an inverted funnel trap if you’re feeling fancy. You can watch the little bubbles of acidic vapour coming out of your reaction be neutralised in the flask, one at a time. It’s a very rudimentary scrubber, but one that will prevent the metal pieces in your hood from corroding too quickly. 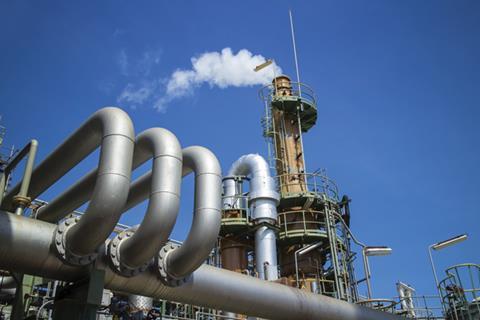 The simple tube in a beaker gives way to something a little more complicated on kilogram scale. A Venturi scrubber is a device where the scrubbing solution is forced into droplets at the top of a tall column, to react with an incoming gas or liquid to be scrubbed. A noisy little circulating pump can be used to keep the scrubbing solution flowing.

I once worked at a facility that had a larger version; it was about six feet tall and it was used to scrub away the acidic vapours from a 72 litre reactor. It worked quite well to keep the lab safe. One day, we opened the doors to the laboratory to find a rather odd haze in the air and a disquieting silence. It didn’t smell great, either. We discovered that, in the night, the scrubbing solution had run out of base and had been saturated with acid, allowing the acidic vapours to flow into the laboratory. It was disturbing to note that the metal fixtures began rusting quickly after that evening.

Once industrial quantities of material are used, the maths is simple, but the quantities are daunting. Want to chlorinate 500kg of benzyl alcohol with thionyl chloride? If you use 1.2 equivalents of chlorinating reagent, you’ll need 660kg of SOCl2 – a mere 400 litres, or approximately two (very heavy) drums.

Thionyl chloride is nasty, nasty stuff. In its pure, distilled form, it is an innocuous clear liquid that is very effective at chlorinating heterocycles or generating acid chlorides. In the plant, it comes in huge, specially galvanised zinc drums that are resistant to its corrosive properties – like, one hopes, the rest of the facility. Owing to its tremendous density (1.64g/ml), these drums are remarkably heavy.

These two drums will generate 355kg of sulfur dioxide and 202kg of hydrochloric acid when the reaction is completed. Since you don’t want deathly choking clouds of these gases pouring out of your condensers, annoying the neighbours of your facility (they tend to call the authorities when that happens), or raining down and rusting out your nearby car, you’re going to want to scrub them.

To completely neutralise these vapours, the operators will need to load around 750kg of sodium hydroxide pellets into the scrubbing tank. If you’re receiving your caustic soda in 25kg bags, that’s about 30 bags. It’s going to be heavy work getting that into the scrubber – and don’t forget, you can’t get any more concentrated than about 50%wt in water. The gases will react with the basic solution quite readily, forming the much less noxious sodium sulfite (which may ultimately be oxidised to sodium sulfate) and sodium chloride.

It’s not just chemical plants that use scrubbers. Thanks to the lessons learned during the 20th century, modern coal-burning power plants and other facilities are required to scrub away the sulfurous gases that would contribute to acid rain. In addition, the mercury contained in coal can be captured from the hot flue gases with bromine-impregnated activated carbon, thus limiting the amount of neurotoxic mercury that ultimately ends up in the oceans and the food chain.

Sewage treatment plants rely on odour scrubbing towers, using sodium hypochlorite and sodium hydroxide to oxidise noxious hydrogen sulfide emissions to much less odorous sulfate. Volatile amines can be captured by passing the gases through acidic solutions – no fancy chemistry, just a simple neutralisation. After all, just like your lab and industrial plants, it just doesn’t do to stink up the neighbourhood.